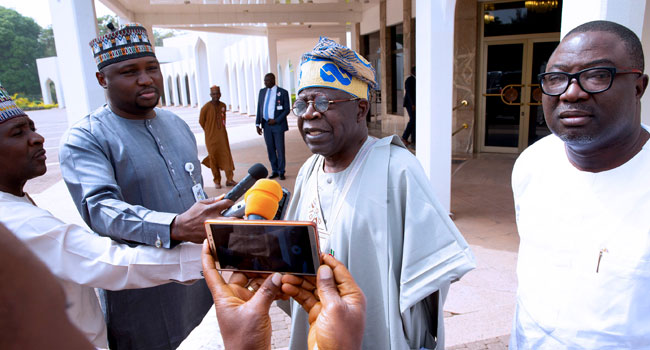 It is no longer news that APC National Leader, Bola Tinubu has declared his interest to run for the highest office in the land. I listed below 12 key reasons why Tinubu may never be handed the APC ticket.

There are many incidences and issues working against his aspiration and why he may never get the APC ticket.

1. The Generals from Alani Akinrinade to TY Danjuma, IBB etc do not want Asiwaju to contest. Akinrinade and Danjuma asked him to withdraw from the race and analysed to him the danger of losing everything if he contested the primaries and lost.

General Akinrinade is close to Asiwaju and does not want him to lose face post the election.

2. The Governors told him at the meeting he had with them that they would not support him. They accused him of being obsessed with power.

They reminded him of how he snubbed them when they pleaded with him to support Ambode and Obaseki.

4. His health challenges are too overwhelming to be ignored. Nigerians want a healthy president who will be available to lead the country out of the woods.

5. Too many faux pas. Since announcing his intention to contest, Asiwaju’s campaign has been bogged down with self-inflicted errors through wrong pronouncements from asking people to renew obsolete voter’s cards to the threat of violence.

People doubt his mental capacity even though he insists he has the capacity to lead.

6. Avoidable rift with NURTW. Tinubu sided with MC Oluomo against the NURTW which has a nationwide reach.

Traditionally, Tinubu’s camp enjoyed a good rapport with the body during elections. That base is no longer there.

7. The aspirant the stakeholders in the party is considering now a PYO . Asiwaju is not on President Buhari’s radar and the President has told close associates he will never hand over power to Tinubu or Atiku because of the concern over greed and corruption.

Fayemi and Amosun may also declare their intention any moment from now but once the party decides on consensus to support PYO, they will throw their weight behind him. Fayemi and Amosun’s declaration will further enfeeble Asiwaju’s ambition.

Of course, Fayemi and Amosun would like to win but they realise that their chances may be slim.

8. The general consensus in the South West is that PYO stands a better chance to win at the general election than Asiwaju. Some even believe that Asiwaju himself knows.

They therefore cannot understand why he is playing the spoiler role.

9. Almost all members of the Tinubu original power/intellectual base and allies when he was Governor are not in support of his Presidential ambition.

Aregbesola, Afikuyomi, Ojudu, Onanuga, Alake, Fasola etc. Most of them may work for PYO.

10. Discerning people have compared Lagos with Dubai in 1999 when Tinubu took over as Governor and has been the power behind the throne since then.

There is no basis for comparison between what Dubai has become between 1999 and now and what Lagos has become in the intervening period in spite of the enormous resources of Lagos.

They pinned it down to one source: the avarice of Tinubu.

They do not see how Nigeria can make the kind of progress the people want with Asiwaju’s leadership style.

What the country wants and needs is a selfless leader who will work for the best interest of the people.

11. Above all the nation won’t survive a Muslim – Muslim presidency. It is too dangerous to try and Tinubu is insisting on that. It was for this same reason he could not be VP to both Atiku and Buhari at different times.

The non acceptance of this is not even from the Christians but from fellow Christians.

12. His greed is believed to have no comparison. Some said it could only be compared to that of Abacha.

Recently he moved to an 11 million pounds house in London transferred to him by Madam Deziani in 2016 as payment for protection from the administration which they believed he brought to being.

Another luxury apartment owned by the same Deziani and transferred to him has been located in New York and the government of Nigeria has filed actions to recover them.