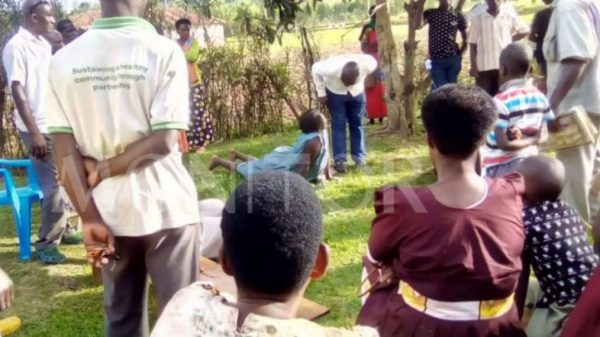 A 59-year-old woman was publicly caned for having sex with an 18-year-old man at Bwera Parish headquarters in Kyeizooba Sub-county, Igara East Constituency in Bushenyi District, Uganda.

The woman identified as Ms Kedesi Katsigaire, a resident of Nyambirizi Village, had previously been accused of being a sexual predator.

Ms Katsigaire was reportedly caught red-handed by residents having sex with Godfrey Musyotoore in her house last Tuesday.

Women in the area have for some time suspected Ms Katsigaire of sexually abusing their children.

“We would not mind if Ms Katsigaire was practicing her dubious behaviour with old men. But when you look at the [age] gap between the two, it’s abnormal,” said Ms Jacenta Kamashengyero, a social worker at Bwera Parish.

“We had to come in because it was degrading our dignity as women. When we entered the suspects’ house, we found the two in bed naked and they started to ask for forgiveness…we decided to take them to the parish headquarters where we found the whole community gathered.” she added.

“When we arrested the two, we looked at all options. Communal work and caning. Ms Katsigaire chose caning and we decided to give her 10 strokes of the cane as a warning to other [older] women,” Mr Bigirwa said.