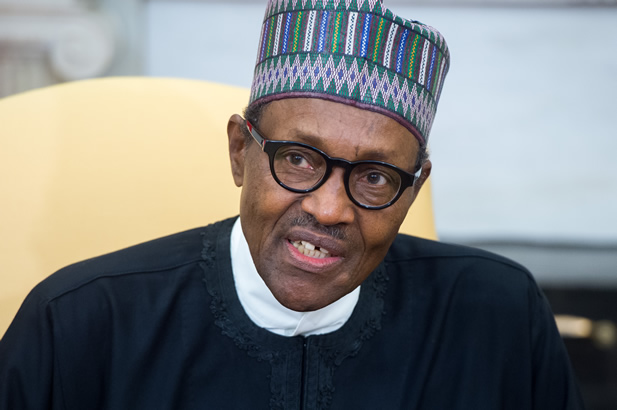 <![CDATA[ President Muhammadu Buhari says he refused to replace Godwin Emefiele, governor of the Central Bank of Nigeria (CBN), when he took over power because he wanted to give him the opportunity to salvage the economy from its “terrible condition”. <script async src="//pagead2.googlesyndication.com/pagead/js/adsbygoogle.js"> Buhari said this on Friday night when he hosted some of his supporters at the presidential villa in Abuja. The president also insisted that the Peoples Democratic Party (PDP) left the country in ruins, challenging anyone to present any evidence that could contradict his claim. “I said it is on record and I challenge anybody to check from Europe, United States and Asia that between 1999 and 2014, the 16 years of previous administration there was an average of 2.1 million per day of crude oil at the average cost of 100 dollars per barrel,’’ he said. On the letter former President Olusegun Obasanjo wrote in January, Buhari said Femi Adesina, his spokesman, was angry over it and wanted to reply Obasanjo “but I stopped him for two reasons; first, he is much younger than me and Gen. Obasanjo. Secondly, I am from the same constituency with Gen. Obasanjo.” He, however, said Lai Mohammed, minister of information, “disobeyed’’ his instruction on not replying the former president but that Mohammed did a good job in the end. Buhari said the reply by the minister showed Nigerians the realities on ground when the current administration came on board in 2015 and its ongoing efforts to revive the “inherited damaged economy”. “I really appreciate how you choose this time during Ramadan to come from across the country to see and congratulate me for what we were able to do,” he said. “We were constrained to explain our position when the former head of state wrote a letter; Adesina was agitated and wanted to immediately reply but I didn’t allow him. “When Lai Mohammed came, I said he shouldn’t and he insisted. He disobeyed me. He said I must allow him to talk; then, of course, being a professionally information person, I listened to him and asked him what are going to say. “He said he was going to remind Nigerians where we found ourselves when we came in as a government, where we are now, what we have done in between with the resources available to us… he did a good job because a number of people rang me and said Lai Mohammed has done a good job because I went public in several times.” The president assured Nigerians that his administration would continue to spend more funds to upgrade the nation’s infrastructural facilities. He said the government had also expended more than N1.3 trillion on capital projects across the country. Add 0802 739 7554 To Receive SKYTREND NEWS Alerts On WhatsApp; For Adverts Enquiries, Whatsapp 0802 739 7554, Send Articles & News Stories To editor@skytrendnews.com. TheCable READ ALSO! Health Arena With Dr Adesina: Infertility – Causes, Effects And Treatment Options READ ALSO! 14-Year-Old Pregnant Housemaid Dislodges Her Childless Madam, Says I Can’t Share Husband With You READ ALSO! SHOCKING, ALARMING: Nigerian FRSC Official Engages Woman In Serious Physical Combat (VIDEO) READ ALSO! How I Stopped Obasanjo From Becoming Nigerian Version Of Mugabe — Atiku READ ALSO! I’m Happy Leaving My Husband, Nine Children For New Lover — Housewife After 23 Years Of Marriage READ ALSO! 15-year-old Groundnut Seller Took Her Torn Skirt To 58-Year-old Nigerian Tailor For Amendment: WHAT HAPPENED NEXT WILL SHOCK YOU! READ ALSO! Israeli Warplanes Strike Hamas Military Targets As Retaliation For Palestinian Rocket Fire READ ALSO! The Smart CEO: Top 5 Websites To Get Cheap Domain Name Registration READ ALSO! First Bank’s Appalling Customer Service And Utter Disregard For Its Customers READ ALSO! Between GoDaddy And Namecheap: Making The Best Choice For Domain Name Registrar READ ALSO! Nigerian Filmmaker, Zuriel Oduwole Makes Forbes List Of 100 Most Influential African Women READ ALSO! Woman Marries Her Son After Getting Pregnant For Him READ ALSO! This Pretty 21-year-old Lady, Tawa Oshunuga Committed Suicide After Her Lover Of 4 Years Dumped Her READ ALSO! The Smart CEO: Top 5 Websites To Get Cheap Domain Name Registration ]]>