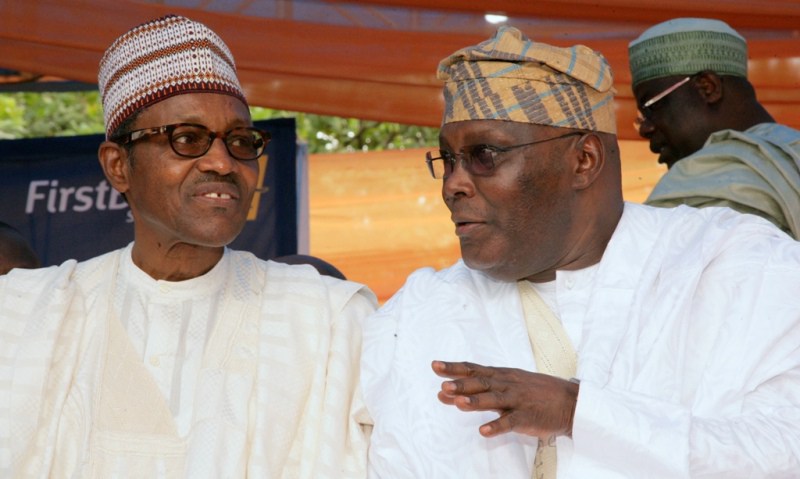 
Atiku who defected from the ruling All Progressives Congress to the Peoples Democratic Party stated this in response to a statement by the presidency, listing what he considers corruption cases in the Muhammadu Buhari administration.

The presidency in a statement on Wednesday reacted to an interview Mr Abubakar granted a news media on the “uncompromising” stance of Mr Buhari.

“President Buhari is uncompromising in the quest to restore probity and accountability to public office. He is uncompromising in cleaning the rot Nigeria was consigned into pre-2015, thus the war against corruption is being fought without fear or favour,” Femi Adesina, Mr Buhari’s spokesperson wrote.

Mr Abubakar, in a statement by his media office, however, disagrees with the statement.

“If the above is true, then why did the presidency do nothing as the Attorney General of the Federation, Abubakar Malami, went to court to secure a kangaroo court order to stop the Senate of the National Assembly from investigating who recalled, reinstated and double promoted Abdulrasheed Maina?

“If President Buhari is “uncompromising in cleaning the rot Nigeria was consigned into pre-2015” then how come the latest Corruption Perception Index by Transparency International reveals that Nigeria is more corrupt today than she was in 2015, having moved 12 steps backwards in Transparency International’s Corruption Perception Index, moving from 136 in 2014 under the PDP to 148 today?


“Again, we ask how uncompromising a President can be when he allows a minister accused of forgery to remain at her job?”

“It appears that the president is surrounded by people who have become his echo chamber and are telling him what he wants to hear, otherwise no one in his right mind would call an administration that increased the price of petrol while at the same time paying more subsidy on the product than the previous government which it accused of ‘subsidy scam’, uncompromising against corruption.

“It is only common sense that if the price of petrol increased by 68% from ₦87 per litre to ₦145, then the cost of fuel subsidy should also reduce, especially as the price of crude oil also reduced. However, by some strange mathematics, the Buhari administration pays a whopping ₦1.4 trillion on subsidy per annum according to the minister of state for petroleum. This amount is almost twice what the Jonathan administration paid and yet President Buhari accused that administration of scamming the nation.

“Where is the transparency in that? No wonder the minister of state for petroleum resources revealed in a leaked memo that $25 billion worth of contracts were awarded by the Nigerian National Petroleum Corporation under the watch of the supervising minister of petroleum, President Muhammadu Buhari.”

“More than a year after the probe panel which probed the fantastically corrupt Ikoyi apartment billions affair, nobody knows who owned the money and how $43 million in cash was housed in a government linked flat. So much for an uncompromising attitude to corruption!” Mr Abubakar said.

“But power drunk? No! And being a man “who will not be ready to leave power without a fight?” Never! Not President Buhari, who has demonstrated in many ways that he is a committed democrat, though also a retired military general. He has no apologies about that. Through a sterling military career, he served Nigeria with his heart and might, before venturing into partisan politics,” Mr Adesina had written.

“On the issue of being power-drunk, President Buhari is his own witness against himself. It goes without saying that a president who publicly boasted that the rule of law can be suppressed against certain individuals is not only power drunk, but dictatorial.


“By that statement made by President Buhari at the opening ceremony of the 58th Annual General Conference of the Nigerian Bar Association, Nigerians now understand why this administration continues to flout court orders. This is what happens when a president thinks he is above the law.

“In conclusion, we advise the presidency to familiarise itself with the constitution of the Federal Republic of Nigeria 1999 as amended, in order to understand that the Rule of Law and the fundamental human rights of all Nigerian citizens are guaranteed by that document which the president swore to uphold on May 29, 2015.”