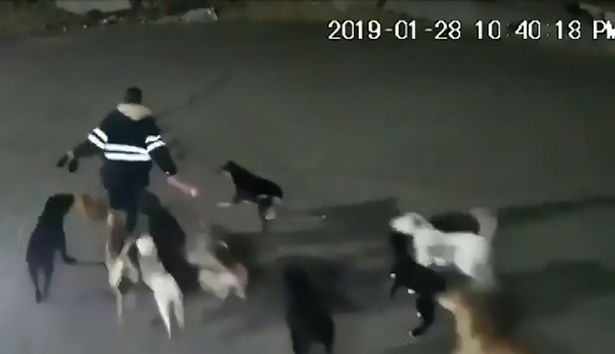 A woman has been killed by a pack of dogs after they chased her, pulled her to the ground and ripped her apart.

Margarita was on her way to work at a toll booth in Mexico when she took a shortcut across some wasteland.

She can be seen being chased as she tries to get away. But as she runs out of camera shot, she apparently falls to the ground.

According to reports, the woman was found with large parts of her skin torn off and with chunks of her hair and scalp ripped out.

Reports said that the dogs were medium-sized and probably attacked because she had strayed into their territory.

The mayor instructed members of the Control and Animal Welfare Centre to visit the scene and track down the animals.

The dogs reportedly tore chunks out of her (Image: CEN)

Police are now looking into the case and have not ruled out the possibility that the dogs were set on the woman.