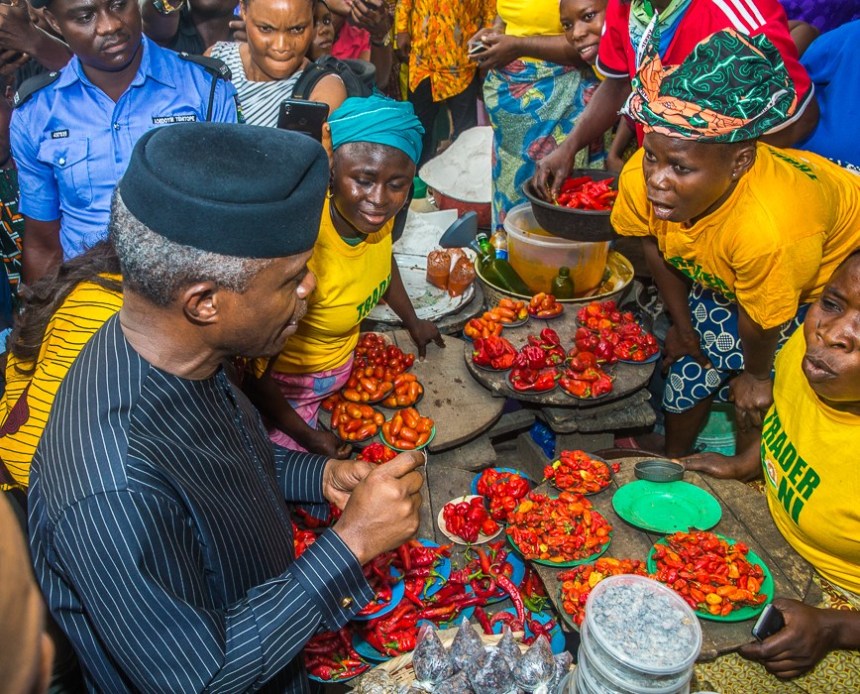 The TraderMoni scheme is one of the many social intervention policies of the Federal Government meant to alleviate the suffering of the Small and Medium Scale Enterprises (SMEs) which provide almost 90% of jobs in Nigeria. The operators of the scheme says it’s a direct response to the challenge of access to funds for these micro-businesses, and make way for their financial inclusion. Trader Moni is one of the three microcredit products of the Government Enterprise and Empowerment Programme (GEEP) scheme, created specifically for petty traders and artisans and executed by the Bank Of Industry (BoI).

GEEP, a unit in the Office of the Vice President was formed to provides the much-needed capital to traders, artisans, farmers, petty traders and it comprises of three products: TraderMoni, MarketMoni and FarmerMoni. It was initiated in 2016 by the Buhari Government, with an understanding that there are over 30 million Nigerians at the base of the pyramid who are in active commercial activity but never had opportunity to access credit.

According to Mr Uzoma Nwagba, the Chief Operating Officer of GEEP, “the scheme is an opportunity to properly identify and capture these (30 million) Nigerians, provide them with capital, and in the process onboard them into the formal financial system of bank accounts and mobile wallets – in a way that they can be sustainable recipients of credit.” Nwagba added that the scheme gave a minimum of 2 million loans across GEEP by the end of 2018.

GEEP aims to achieve two goals. (1) Access to finance by SMEs. (2) Financial inclusion which is inclusion into the formal financial sector of many petty traders by operating mobile wallets or bank accounts. The singular but remote vision of the GEEP program is to use these various economic empowerment tools as a means to taking financial inclusion down to the grassroots.

Data from the Bank of Industry (BoI) showed that (SMEs in Nigeria received a meagre 0.04% of totality of banks loans in the whole of 2017 despite employing a whooping 84% of the entire nation’s workforce. SMEs are very strategic and essential for accelerating economic growth and therefore for any country to experience national growth and development, the govt must target SMEs and funding is one critical area where this sector is been neglected. There are over 20 million SMEs in Nigeria which constitute over 90% of all the businesses in the country and constitute almost 50% of the entire nation’s GDP.

The scheme is driven by government agents on the field, equipped with tablet computers, and disbursed through mobile wallets which only require the trader to have a mobile phone. As at first quarter of 2019, over 30 Billion Naira is said to have been disbursed to over 2 million traders, across Nigeria, with the instrumentality of the entire GEEP scheme through small loans, which according to BoI, has helped beneficiaries transform their businesses.

“If these beneficiaries repay their first loan as promised, they immediately qualify for the second level N15,000 loan. After repaying the second loan, these beneficiaries will qualify for N20,000 loan, then N25,000 loan, and finally they graduate into the MarketMoni loan program where they can get up to N100,000 interest-free, collateral-free loan. However collecting higher level of loans is dependent on non default in repaying the facility. Beneficiaries have up to six months to repay the loan with flexible options of N85 daily or N430 weekly.

By requiring that beneficiaries seeking higher loan amounts provide a bank account (and BVN), the TraderMoni/GEEP entrepreneurs will be on-boarded into the formal financial services sector.” If you qualify, the Federal Government sends you a text message with a code you will dial to get the funds. Pay Back is done through any of the following banks, GTB, UBA, Ecobank, UnionBank, Stanbic, Sterling, Wema, Fidelity, Heritage, Jaiz.

BoI targets for the first phase of the scheme is 30,000 beneficiaries per state including the Federal Capital territory. The bank claims Tradermoni alone reached at least 1.2 million beneficiaries in this phase while another 350,000 persons benefitted from MarketMoni across all the states of the federation. More than 30,000 new traders have reported come aboard in each state for the second phase.

One of the commendable features of GEEP is the complete elimination of paper works and bureaucratic form filling which often characterises such loans. According to Mrs Toyin Adeniji, the Executive Director of the Micro Enterprise Division of the Bank of Industry, “beneficiaries of GEEP scheme are registered via mobile forms on tablets and mobile devices. This enables real-time data quality check and verification and ensures that there are no errors in input and consequently, in interpretation. The complete elimination of paper-based registration has enabled the program scale fast; registering over 7m micro enterprises in less than 2 years.” This is commendable.

The scheme has however generated a significant amount of controversy and national discourse from those who view it as politically motivated and others who laud its impact. It has been opined that even when genuine, transparency and accountability have often been the bane of most government intervention projects and concerns have been raised in this direction for the GEEP driven Trader Moni and others. There have also been reports that the GEEP initiatives, especially TraderMoni, being a Vote-Buying scheme of the federal government. The opposition parties in Nigeria also contended that there was no provision for the Trader Moni in the 2018 budget. Odilim Enweagbara, a renowned economist and entrepreneur, insisted the scheme was to curry support for the 2019 general election.

His Words: “That fraud called Trader Moni must be independently investigated. Trader Moni was the newest form of vote buying and inducement of voters to vote for APC. That was why it was done a few months to the 2019 general election and has since been stopped because the objective has since been achieved.”

Daramola, a graduate of Food Science from the Ladoke Akintola University of Technology, Ogbomoso, but without a job had to go into petty trading. His hope however in getting funding from TraderMoni was dashed after being given just N8,000 instead of N10,000, N2,000 deducted for no known reason. He posted on his Twitter handle, @DaramolaMike22, “So I received the #TraderMoni by #FG today, but to my surprise, the officials gave out N8,000 instead of N10,000 which means they deducted N2,000 each from everyone who got the money. How do we make Nigeria work with such acts?

Many others have also complained about these 20% deduction from the tradermoni fund. According to a Punch Newspaper reports, a meat seller in the Sabo market, Ikorodu by name Akeem, who benefitted from the tradermoni said he did not mind collecting only N8,000 rather than the expected N10,000, because according to him, it was a gift.

“They just came one day and asked for my number. I gave them. Next thing I knew, they said I had qualified to receive loan of N10,000 without any collateral. When they came they gave me only N8,000. I did not ask for it so I could not reject it,” he said, adding that he was not concerned about the ‘incomplete amount’.

Earlier in January this year, Transparency International Nigeria Boss, Awwal Rafsanjani said the TraderMoni scheme, is a form of voter inducement. Speaking on Lunchtime Politics, a programme of Channels Television, he added that the initiative was an “official use of public funds in the name of TraderMoni to actually induce voters.”

Former Presient, Chief Olusegun Obasanjo had also mocked the TraderMoni initiative describing it as an outrightly idiotic programme. He wondered where the federal government got the money from and questioned the future of Nigerians who lost their jobs in the past three and a half years.

Obasanjo queried, “What about millions who have lost their jobs in the last three and a half years? The timing is also suspect. Those who criticise the action are called evil but they are not evil as they know what they are doing and saying, and they love Nigeria and Nigerians not less than the likes of Osinbajo. They are not devils incarnate; they are patriots.”

A Sahara Reporters report in January 2019 though described the TraderMoni scheme as “a lofty idea” but goes on to say “It’s at best a myth as the implementation of Trader Moni loan falls short of the well-branded campaign about the scheme as led by the vice-president. The Nigerian government does not have a water-tight strategy for recouping the funds, if indeed it intends to recover the loans.” According to the report, “An officer at the Corporate Communication department of BoI put the burden of recouping the loans on the agents. Interestingly, these agents have been accused of various fraudulent acts in disbursing the funds.”

The Federal Government had, however, argued that the TraderMoni was an empowerment initiative designed to meet the financing need of at least two million petty traders across the country and have consistently denied any fraud allegation in the scheme.

As goodly intended as the TraderMoni is, if these fallbacks are not addressed, it may eventually mar the scheme and the loans ending in the wrong hands. We implore the government to make the processes of application and disbursement of Trader Moni more transparent and simplified and open to all qualified Nigerians which fall into the applicable trades.