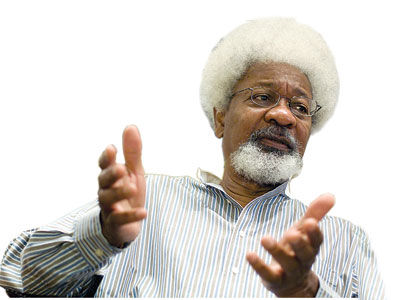 He stated this at a meeting with Governor Samuel Ortom of Benue State on Tuesday at the Government House in Makurdi, the state capital.

Professor Soyinka, who visited some displaced persons at their camp in the Abagana area of the state, noted that the insurgents and others were terrorising Nigerians.

According to him, the security situation in the country requires the immediate attention of the government, especially at the federal level with an all-inclusive approach.

“It’s a pity that this area of the country is really besieged. First it was Boko Haram, then it is these herdsmen, and then recently there is ISWAP; it strikes me that a holistic approach has to be taken,” said the Nobel laureate.

“And I hope that this government has seen the result of taking things easy when they should be taken by the throat and tackled very decisively; now that they’ve seen how violence calls to violent, how impunity calls to impunity, and arrogance calls to arrogance.”

He decried the situation where a group of persons would threaten the peace of a state in a civilised society when the government takes decisions in the interest of its people.

The Nobel laureate said, “When you have any kind of unit in an overall community which says, ‘either you do this or we’ll show you’, this is the mentality which led to the virtual takeover of an order by a philosophy of disorder.

“The possibility that any section of society can call the shut for the totality, and I’m referring to when Benue State passed the law about open grazing and the criminals, the homicidal maniacs had inhaled to say ‘you take the law out or else’ … that means we don’t live in a civilised society.”