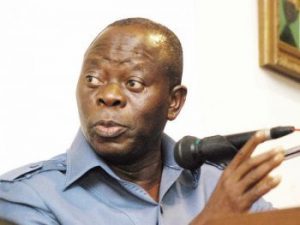 The All Progressives Congress (APC) in Edo state has suspended Adams Oshiomhole, national chairman of the ruling party.

Anselm Ojezua, chairman of APC in the state, was quoted by TheCable Newspaper as saying this is as a result of the role of Oshiomhole in the crisis rocking the state chapter of the party.

He also said a vote of no confidence was passed on Oshiomhole by the chairmen of the APC in the 18 local government areas (LGAs) of the state.

“Consequent on the development, the State Executive Committee has adopted the vote of no confidence passed on him and the subsisting suspension order from the organs of the party in the state,” the statement read.

“Comrade Adams Oshiomhole is the one behind the crisis in Edo APC. We have passed a vote of no confidence on him and he stands suspended from the party.

“We don’t want what happened in Zamfara State or other parts of the country to happen in Edo State.”

The internal crisis in Zamfara APC had prevented the party from conducting primary elections before the deadline set by the Independent National Electoral Commission (INEC).

Oshiomhole and Godwin Obaseki, governor of the state, are currently locked in horns ahead of next year’s gubernatorial election in Edo.