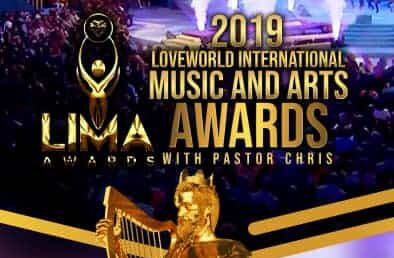 Described as the greatest Christian gospel music and arts show anywhere in the world, Loveworld Incorporated aka, Christ Embassy, has announced the hosting of the fourth edition of the Loveworld International Music and Arts Awards (LIMA).

Addressing newsmen in Lagos yesterday, a member of the Central Executive Council , Pastor T. T. Edun said the event with the theme “Hotter than Fire,” which is a celebration of the creativity and excellence of Loveworld Music and Arts, will hold on Sunday November 17, 2019 in Lagos at the Loveworld Convocation Arena.

He said, “Christ Embassy with all modesty has some or most of the big names in the gospel music industry in Nigeria, South Africa and some other countries and these artists have done well reaching believers and even non believers in Nigeria and the world over with the gospel of Jesus Christ in music.”

In the words of the Media Director of Loveworld Inc, Tony Ikeokwu, “We believe that if you give people opportunities to express themselves, they will excel and because we feel we have limited opportunities available to our artists to be celebrated oustside as gospel music ministers, so we instituted the LIMA awards to recognise and honour our own.

“LIMA is a platform created by the President of The Loveworld Inc aka Christ Embassy, Rev. Dr Chris Oyakhilome PhD, in 2016 to recognise and reward music ministers produced by the church who are standing out in their ministry.”

In her comment, Evangelist Kathy Woghiren, Director Loveworld Music and Arts Ministry, (LMAM) said LIMA Awards “is actually a full concert to recognise and appreciate various arts and music ministers and reward those that have done exceptionally well.”

She said, “The beautiful thing about this year’s edition is that it is not only going to be watched by the over 20,000 who are going to be at the venue but it’s going to be streamed live on the internet and all Loveworld satellite stations.”

Deacon Buchi one of the Loveworld All-Stars in his comment explained that “Over the years, shows like LIMA has improved our own in-house artists, musicians, songwriters, dancers, comedians, spoken word artists amongst others.

“LIMA has stretched the possibilities of our achievements and greatly motivated us on the path of continuous improvement and excellence. Younger artists are coming up and with every edition, you find new voices emerging and the younger ones are motivated to strive for excellence in their music and arts ministry.

“We know that the Loveworld All Stars are people to emulate as they are recognised and involved in events all over the world.”

In attendance at the briefing were some members of the Loveworld All Stars including Joe Praize, Buchi, Obi Shine, Rozey, Chuka amongst others.