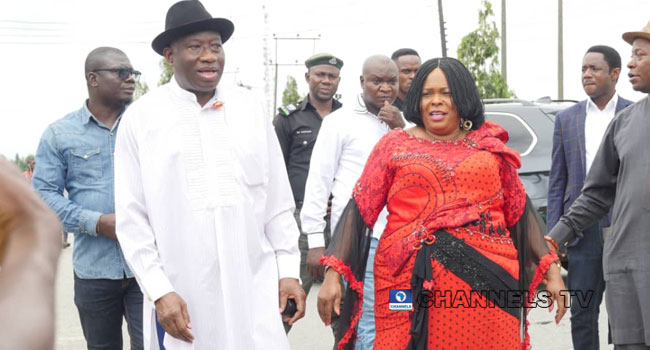 Former President Goodluck Jonathan have expressed rage over the delayed voting exercise at his polling unit adding that it is an indictment on the Independent National Electoral Commission (INEC).

He said this while addressing journalists after casting his vote in the Bayelsa governorship election.

INEC officials arrived at Jonathan’s polling unit about 11 am — three hours after the scheduled time for the commencement of the exercise.

The former president said the delay is an indictment of INEC, adding that the youth should do more to show responsibility, rather than blaming the government.

“We cannot conduct election in a crisis situation. Whatever we do in selecting who will be our president, governors, local government chairmen reflect on our society and if you bring people that are not competent, you cannot turn round to begin to blame government. Nigerians are so quick at blaming people in authority without blaming ourselves,” he said.

“Look at even this voting, I was here 19 minutes after 8:00am. Election was supposed to start 8:00am. And I have made observation mission in many other African countries and we used to go there 30 minutes before starting. In our reports, we indicate exactly when the vote starts because if you start after that time, it is an indictment on the electoral body that manages the election. There is no reason why election should not be start at 8:00, but at 19 minutes after 8, there was nobody here.

“All the people managing the elections are very young people, you the youths should stop blaming the old people. You should begin to blame yourselves. I was here, no INEC officials to conduct the elections, no security personnel to man the election, no journalist to observe the election.

“It was only one online medium house that I met, no single observer that I met here, even the voters were not here. I have never observed that in any other African country, so we Nigerians must begin to look inward and ask ourselves what is our problem? Can we begin to do things properly. We cannot do things awkwardly and expect the best.”