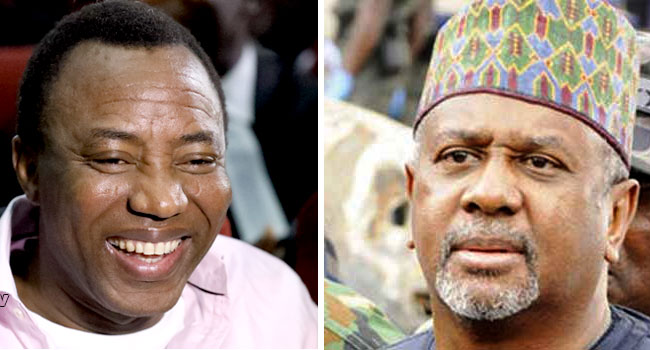 The Attorney-General of the Federation and Minister of Justice, Abubakar Malami (SAN), on Tuesday asked the Department of State Services to release the immediate-past National Security Adviser, Sambo Dasuki; and the convener of #RevolutionNow protests, Omoyele Sowore, from custody.

The directive by the AGF came barely eight days after he said he had no power to issue such directive to the DSS to release Sowore from custody without recourse to court.

The AGF was, in the statement by his spokesperson, Dr. Umar Gwandu, on December 16, reacting to the letter by Sowore’s lawyer, Mr. Femi Falana (SAN), sent to the AGF’s office to demand the activist’s release.

Falana’s letter, dated December 13, had followed the announcement by the AGF’s office that it had taken over the prosecution of the Sahara Reporters publisher and his fellow detainee Olawale Bakare from the DSS.

The AGF’s takeover of the case was informed by the widely condemned invasion of the Federal High Court in Abuja by the operatives of the DSS to rearrest Sowore on December 6.

Falana, who heads the defence team of Sowore and his co-defendant, Bakare, informed Malami that Sowore had, since his rearrest on December 6, been kept in DSS custody without the backing of any detention order of court or arrest warrant.

He stated that two lawyers in the defence team had visited the DSS headquarters in Abuja to demand Sowore’s release but were advised to direct their request to Malami.

In a terse statement reacting to Falana’s letter on December 16, Malami had said, “When parties submit their issues for determination to a court of law, they lack exclusivity of decision over such issues without recourse to court.”

“We remain guided by the established tradition and will not take unilateral decision without recourse to the rule of law,” he added.

In his swift reply to Malami’s statement, Falana said, having taken over the prosecution of Sowore and his co-defendant, Olawale Bakare, the AGF was duty-bound to ask the DSS to release Sowore from “illegal” custody of the DSS.

He said Malami could not wash his hands off the “illegal detention” of the Sahara Reporters publisher like the biblical Pontius Pilate did.

Six United States of American legislators also echoed this point in a letter to Malami, urging him to ensure the release of Sowore since he had taken over the case.

But barely eight days after he rejected Falana’s request for the release of the Sahara Reporters publisher from the custody of the DSS, Malami said in a statement on Tuesday (today), “In line with the provisions of Sections 150(1) of the 1999 Constitution (as amended), and in compliance with the bail granted to Col. Sambo Dasuki (retd.) (as recently varied by the Court of Appeal) and the bail granted to Omoyele Sowore, I have directed the State Security Services to comply with the order granting bail to the Defendants and effect their release.”

Sowore, who was the presidential candidate of the African Action Congress in the February 2019 general election; and his co-defendant, Olawale Bakare, were first arrested in August 2019 and were later, in September, charged with treasonable felony, among other offences, for calling for the ‘RevolutionNow’ protests, which the Federal Government interpreted to be a call for an overthrow of the regime of the President, Major General Muhammadu Buhari.