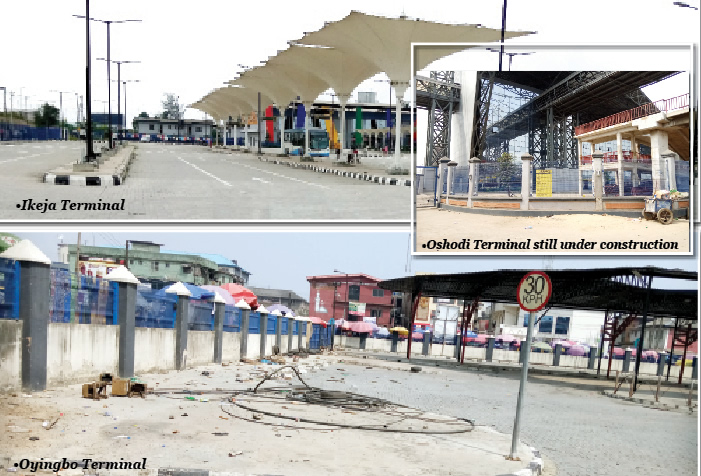 21 months after, Lagos mega bus terminals taken over by weeds

21 months after inauguration of the Lagos mega bus terminals, the project remains uncompleted and unused.

The multibillion naira park was opened with pomp and glamour on March 26, 2018 when President Muhammadu Buhari visited to inaugurate the Ikeja Bus Terminal.

The state government had then claimed the facility would serve 4 million residents, but is now virtually deserted.

According to Punch Newspaper special report, and investigations, the terminal, which is believed to occupy a land mass of about 10,000 square metres, was observed that there was no human presence there. Besides, the environment was untidy and the walkways had been invaded by weeds.

The flower bed overlooking the inauguration board unveiled by the President was crushed and left unattended to. Some of the signal boards, though still draped with nylon, had started gathering dust.

A guard kept watch on the other side of the terminal, where there is a cinema house, an eatery and what looked like a shopping mall under construction.

The guard was quoted as saying that nobody could tell when the terminal would be put to use.

“I don’t understand what is going on there. May be they want to turn the place to a garage for BRT buses. Last night, I saw hundreds of BRT buses parked there. But by 5am, they were driven out. There is nothing going on there,” he said.

At the Oyingbo Bus terminal, which has been under construction since 2017, the story is the same. From the prototype of the design released to the public that year, it was clear that the terminal was intended to accommodate between 50 and 60 BRT buses at once.

The Newspaper also reports that work has stopped on the project.

In August 2018, former Governor Akinwunmi Ambode, promised that the terminal would be completed “soon.” But some residents, who spoke with our correspondent, claimed that work stopped at the site shortly after Ambode left office.

“Work stopped here in August this year. I can’t say when it will be opened. I have no idea,” a man, who happened to be on the premises of the terminal during our correspondent’s visit, said.