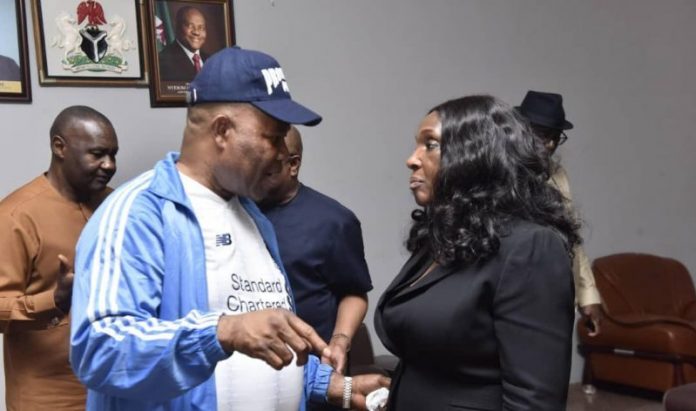 Nunieh spoke to journalists after appearing before the senate ad-hoc committee investigating the NDDC.

Akpabio and Nunieh had appeared before the senate ad hoc panel investigating the alleged mismanagement of N40 billion by the interim management committee (IMC) of the NDDC.

At the hearing, Akpabio said he did not know the expenditure of the NDDC under Nunieh because she refused to give him briefings.

But Nunieh, who made damning allegations against Akpabio, said the minister engineered her removal for failing to dance to his tunes.

She alleged that Akpabio asked her to change the dollars in the NDDC account; sack the head of the legal team who is from the north; remove all directors who refused to follow his instructions and also to implicate Peter Nwaoboshi, chairman of the senate committee on NDDC.

According to Nunieh, Akpabio warned that if she did not follow his instructions, she would be removed.

She also alleged that Akpabio would never sign any document, but rather ask his subordinates to commit fraud.

She said the minister asked her to take an oath of secrecy to stop her from exposing any of his dealings but she refused.

“…Nobody makes any payment in NDDC without Godswill Akpabio…. When we first came to the NDDC, on the day of going for the inauguration, he told me in the car that ‘Madam MD, If you don’t do what I say, the same pen which I use to sign your letter, it will be the same pen I will use to remove you,” she said.

“He said I should remove all the other directors that refuse to take his instructions during the time of Mrs Akwagaga, that is the predecessor before I came. So, he came also with a draft letter that I should write and put it on my letterhead implicating senator Nwaoboshi of collecting contracts in NDDC.

“I told him that I will not, that I am a lawyer and that whoever alleges must prove the fact that senator Nwaoboshi is giving us trouble.

“Akpabio never signed any document. He will always refuse to sign but will tell you to go and commit the fraud.

“For instance, he told me to go and raise a memo and give an emergency contract for flood victims. He wanted me to take an oath; he has denied that but I want to say today, he told me up to three times until we had a reconciliation meeting at the villa in the house of Mr Seriki Abba who is the SA to the president on domestics.

“I refused to take the oath, so he said he was going to remove me. He started the campaign of calumny against me. I did not answer him because the fact will speak for itself.

She also said Akpabio was awarded 30 contracts before she became the commission’s acting MD.

“Then Mr Linus, who was the director, finance, refused to sign because it did not follow due process. Then he also said that I should implicate the chairman of the house committee because the chairman had gone to Ondo state for a meeting to plan against him,” she added.

“Now, to end this matter about the procurement process, I refuse to go with him to deceive Mr President at the FEC meeting because the Procurement Act says if I contravene any session of the Act it is five years imprisonment without an option of fine.

“Akpabio went to get the approval from FEC. The 2020 budget has not even been discussed by the national assembly till today. He lied to FEC which is the greatest embarrassment for a country.

“I refused. I am challenging him to deny any of these allegations.”