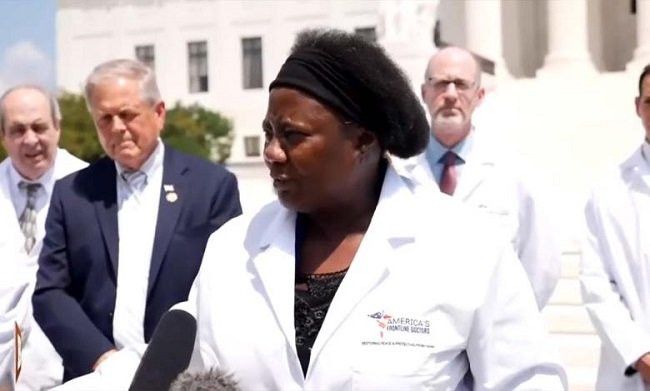 A video of a Nigerian US-based doctor Stella Emmanuel claiming that hydroxychloroquine cures coronavirus was pulled down by Facebook, Twitter, and YouTube after going viral online Monday.

Emmanuel said she had successfully treated more than 350 people in the United States with coronavirus using hydroxychloroquine, zinc and Zithromax.

US President Donald Trump shared multiple versions of the video with his 84 million Twitter. He has always advocated that hydroxychloroquine could prevent or treat COVID-19.

The video quickly went viral on Facebook, becoming one of the top-performing posts on the platform with over 14 million views. It was shared nearly 600,000 times, according to CrowdTangle, a data-analytics firm owned by Facebook.

But it was taken down Monday night for promoting misinformation, according to Facebook.

“We’ve removed this video for sharing false information about cures and treatments for COVID-19,” a Facebook spokesperson told CNN, adding that the platform is “showing messages in News Feed to people who have reacted to, commented on or shared harmful COVID-19-related misinformation that we have removed, connecting them to myths debunked by the WHO.”

Twitter worked to scrub the video late Monday night after Trump shared versions of the video that amassed hundreds of thousands of views.

Twitter took action against the videos that Trump retweeted. By early Tuesday morning, the videos were no longer able to be viewed on his account. Twitter also took action on a version of the video posted by Donald Trump Jr. and others shared by Breitbart News.

The video was also removed by YouTube, where it had been viewed more than 40,000 times. Users attempting to access the video late Monday were greeted with a message that said it had been removed for “violating YouTube’s Community Guidelines.”

Emmanuel pointed to a study published by the United States’ National Institute of Health to back up her claims on the efficacy of hydroxychloroquine and claimed in that much-maligned big pharma companies may have conspired against the use of the hydroxychloroquine to COVID-19.

However, the Food and Drug Administration a federal agency of the US Department of Health and Human Services cautioned against using hydroxychloroquine or chloroquine to treat COVID-19 patients.

National Institutes of Health (NIH), the world’s foremost medical research centres in the US, also shared the same sentiment and halted its clinical trial of the drug, finding that it provided no benefits.

Also, the Recovery trial run by Oxford University has involved 11,000 patients with coronavirus in hospitals across the UK and included testing hydroxychloroquine’s effectiveness against the disease, along with other potential treatments.

It concluded that “there is no beneficial effect of hydroxychloroquine in patients hospitalised with Covid-19” and the drug has now been pulled from the trial.

There’s been some hope that hydroxychloroquine could be effective if used early on when a person gets the virus before there’s a need for them to be hospitalised.

However, there’s no clear evidence on this and the jury is very much out as to its effectiveness in the early stages of infection.