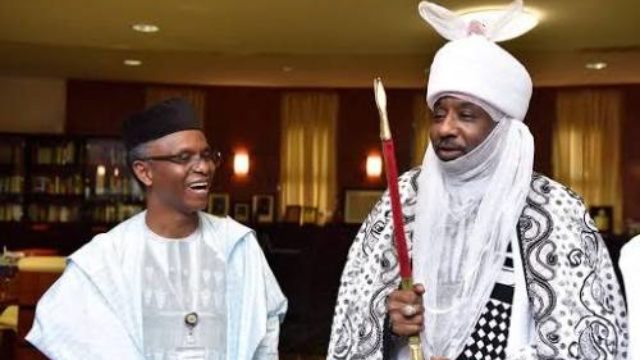 Deposed Emir of Kano, Muhammadu Sanusi ll, on Sunday, reacted to the Nigerian Bar Association’s withdrawal of invitation from Kaduna State Governor, Malam Nasir El-Rufai, as a guest speaker at its 2020 conference.

The former emir was in Kaduna on one week official visit.

The visit was the first to any northern state since he was dethroned by the Kano State Government in March.

Sanusi, who was received by Governor El-Rufai at the Sir Kashim Ibrahim Government House at about 1 pm, cautioned the body of lawyers not to allow the controversy to take religious or ethnic dimension.

He described the NBA action as “sad for freedom of speech”, noting that that doesn’t depict those who wanted progress.

Sanusi noted that El-Rufai remained a nationalist and not an ethnic or religious bigot.

The former emir said, ‎”I am aware that the vast majority of NBA members do not agree with those things.

“Nasir always has opinions. He knows what his positions are on things. He says that position very clearly. People will like it, some people will not like it and that is what some people call controversial and being controversial is actually having an opinion.