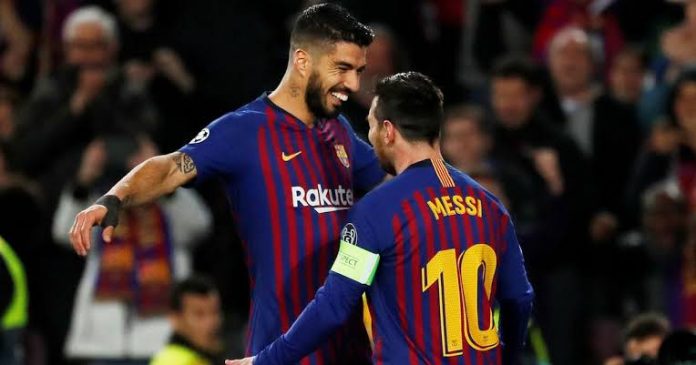 (AFP) Lionel Messi bid an emotional farewell on Friday to Luis Suarez, the day after the Uruguayan striker had said tearful goodbyes to Barcelona after the club sent him to Atletico Madrid.

“Today I went into the dressing room and the awful truth hit me,” Messi posted on Instagram, before renewing his criticism of club management.

“You deserved to be sent off as what you are: one of the most important players in the history of the club,” Messi wrote. “And not to be fired in the way they did it.”

“The truth is that at this point nothing surprises me anymore.”

Messi has a long-running feud with club president Josep Maria Bartomeu which intensified after Barcelona were humiliated 8-2 by Bayern in a Champions League quarter-final in August.

Messi tried to force his exit from Barcelona but finally accepted that he would have to see out the final year of his contract. Meanwhile, two of his closest friends on the team, Suarez and the Chilean Arturo Vidal have left.

The 33-year-old Suarez moves to Atletico on a two-year contract on a free transfer, although, if he does well, Barcelona could receive some money.

Suarez, who hit 198 goals for Barca, becoming the third-highest goalscorer in the history of the club, cried as he bid an impromptu farewell to the club on Thursday.

“I’m going to keep playing, with fresh motivation, with the objective to show I can continue competing,” Suarez said.

“Everyone knows the relationship we have, Leo and me. I’ve already played against him in the Uruguay-Argentina matches, playing against each other is not going to change the feelings we have for each other,” Suarez said.

Messi and Suarez were neighbours in the beachside suburb of Castelldefels and would arrive at training together.

“How difficult it is going to be not to continue to share the days with you, both on the pitch and off it” wrote Messi in a post accompanied by seven pictures of the two men together, sometimes with their families. “We are going to miss you very much. It’s been many years, many cups of mate, lunches, dinners…Many things that I will never forget.”