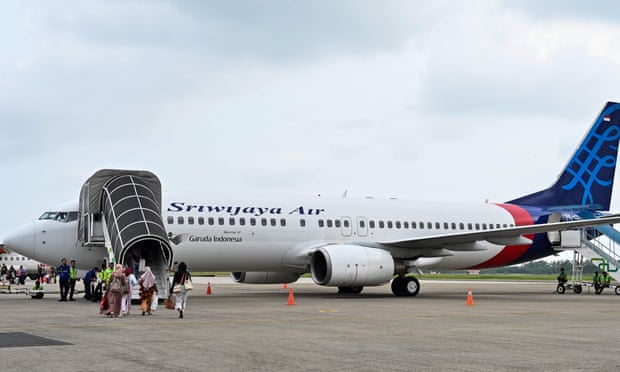 A Sriwijaya aeroplane with more than 50 people on board has lost contact after taking off from the Indonesian capital, Jakarta, on Saturday en route to Pontianak in West Kalimantan province, say local media.

Sriwijaya Air, an Indonesian airline, said in a statement it was gathering more detailed information about the flight before it could make any statement.

What we know so far:
The flight was carrying 59 passengers, including five children and a baby, reported Indonesian newspaper Republika.
There were two pilots and four crabin crew on board, reported Indonesia’s iNews.
The plane took off from Soekarno-Hatta Airport.
It was heading to Pontianak, the provincial capital of West Kalimantan.
The plane was a Boeing 737-500.
The plane lost more than 10,000 feet of altitude in less than a minute, reported flight tracker website FlightRadar24.
Has the plane crashed?
There are no official confirmations of a crash.

The Regent of the Thousand Islands said he had information that “something fell and exploded on Male Island,” in comments to Indonesian newspaper Merdeka.

Unconfirmed images of small debris fished from the water were broadcast by local media.