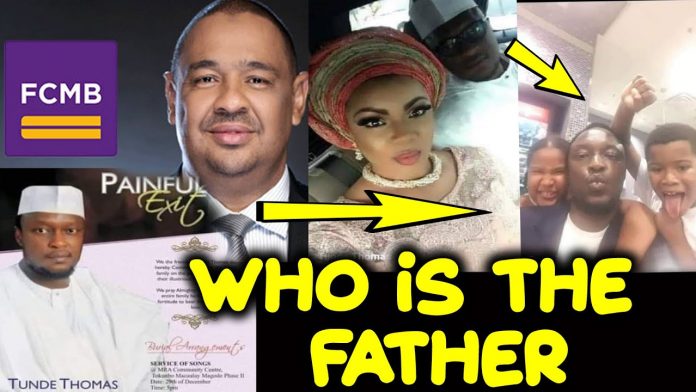 All is not well in the home of Adam Nuru, the controversial Managing Director of First City Monument Bank (FCMB), as his wife, identified as Hauwa, has allegedly concluded plans to divorce him.

Family sources, according to Sahara Reporters say that Hauwa has moved out of Nuru’s house and has likely informed her lawyer to prepare divorce papers so she could leave the marriage.

It was learnt that she would cite infidelity as grounds for divorce.

“I know she has moved out. This case is beyond Moyo or the late Tunde. His own marriage is about to crash now. The wife and her family are really giving him problems. They are ready to deal with him. The Moyo stuff is part one, he is currently facing the second part with his wife,” one of the sources told SaharaReporters.

For some weeks now, the social media have been awash with allegations that Nuru had an affair with Moyo Thomas, a former FCMB employee, fathering two children with her.

It was also said that the alleged paternity fraud resulted in the death of Tunde Thomas, Moyo’s husband.

In a petition, the deceased’s friends had claimed that Tunde died of depression after discovering that his supposed two children with Moyo were not his but Nuru’s.

They also called on the Central Bank of Nigeria (CBN) to sack Nuru, while demanding a comprehensive investigation into the matter.

They claimed that Tunde suffered a stroke due to the experience but later recovered and thereafter met another lady whom he planned to marry.

Tunde was, however, said to have died two days before his relations and his fiancée’s family were scheduled to meet as is customary before marriages in Nigeria.

His fiancée was said to be pregnant at the time of his death.

“This is a case of gross misconduct based on ethical grounds and an unjustifiable economic oppression by the elite (Adam Nuru) against the underprivileged in the society,” the petition read.

“The MD has been doing everything possible to sweep this case under the carpet. We implore the Central Bank of Nigeria, as the apex regulator, and the board of FCMB to investigate this for the integrity of the bank and Nigerian banking industry.

“This is a case too many, while I agree that this is not the full story, the barest minimum will be an investigation of this unethical conduct by the current MD of FCMB Bank, Adam Nuru.”

Nuru recently proceeded on leave to enable the bank to investigate the allegations against him.

The bank made this known in a statement last Tuesday, saying the move was important to guarantee the sanctity of its investigations.

“While this is a personal matter, the tragedy of the death of Mr Tunde Thomas and the allegations of unethical conduct require the bank’s board to conduct a review of what transpired, any violations of our code of ethics and the adequacy of this code of ethics.

“This is already under way. During the period of the review, the managing director has volunteered to proceed on leave. This will guarantee the sanctity of the review process.”

Meanwhile, Moyo, who recently broke her silence on the matter, denied allegations of paternity fraud levelled against her.

In her statement, she also denied ever telling her late husband that he was not the father of her children.

The statement read, “I write in reference to all the allegations and accusations that have recently been making the rounds on the internet and various social media platforms. I have refrained from responding to this matter for various reasons, one of which is to preserve the memories of Tunde who departed to be with his maker on December 16, 2020. Memories, not only to me, but to his children, who are still young, and to everybody who had a relationship with him.

“Just like any marriage, Tunde and I had a lot of differences in our marriage, some of which even led to police intervention. But I remain committed to keeping only positive memories of him. No one can ever understand what transpired between us or what each of us experienced in the marriage; like they say, it is he who wears the shoes that knows where it pinches. In all of it, I never for once wished him bad. His untimely and sudden death is still a shock to me as it is to many others.

“On no occasion did I ever tell him he was not the father of our two children. It is therefore deliberate falsehood and certainly malicious to allege and insinuate that I informed him that the children are not his. The children still bear his name. Only God knows why he died in an untimely period. It is not in my place, or anyone’s place to play God and talk with certainty as to the cause of his death, without proven medical facts.

“Despite our separation, we never allowed our differences to affect the relationships we respectively have with the children. He still had conversations with the children like any father will, up until his sudden and unfortunate death. It is quite sad and disheartening to see the pictures of these innocent children splashed all over the internet with very disparaging and weird comments.

“I do wish his family and friends the fortitude to bear the unfortunate loss and I ask that we all be allowed to grieve his loss in peace. He has now been laid to rest and we implore all and sundry to please respect our privacy and allow those grieving his loss, including the children and I, to do so in peace.”