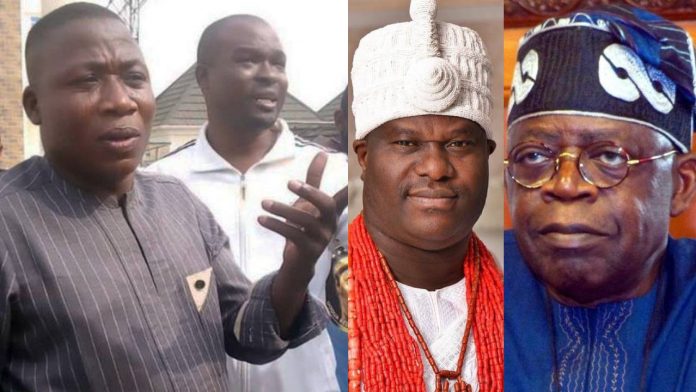 Igboho also flayed some Yoruba leaders, including traditional rulers, alleging that have not shown enough support for the struggle to liberate the Yoruba from their ”Fulani oppressors”.

Speaking during a virtual town hall meeting monitored by TheCable, Igboho said the Ooni and others are interested in their own gain even though they claim to represent the Yoruba interest.

The meeting, which started at 11:15pm on Tuesday, ended at 1am on Wednesday. It had more than 1000 participants from Nigeria and the Diaspora.

Igboho joined in at 12:16am, saying he was just entering Oyo town to see Lamidi Adeyemi, the Alaafin of Oyo, for a meeting. He said the monarch is in supporter of his struggle.

Igboho had issued a seven-day ultimatum to herders in Ibarapa area of Oyo state, blaming them for kidnapping, killings, destruction of farmland and insecurity in the state.

After confronting the herders in Ibarapa with some youths in the area at the expiration of the ultimatum, he moved to Ogun state on Monday and was received by thousands of youths.

According to him, the fight to liberate the Yoruba and bring lasting peace is not for the police but for all Yoruba people, irrespective of where they are all over the world.

He said: “I am not concerned about the police. The struggle is about Yoruba agenda as it concerns security situation in our land and I trust Yoruba people for support. People are afraid because of the atrocities of the herders. We also pray that our leaders will support us irrespective if their fear of being arrested. They should be able to talk to President Muhammadu Buhari on security in Yoruba land.

“When Ooni visited Buhari, the president received him by standing up but he said something I don’t like. That is why the Alaafin called me. He wants to tackle what Ooni said.”

Igboho said he has not received financial support from anyone, adding that he needs buses to transport his followers to places where the herders are wreaking havoc.