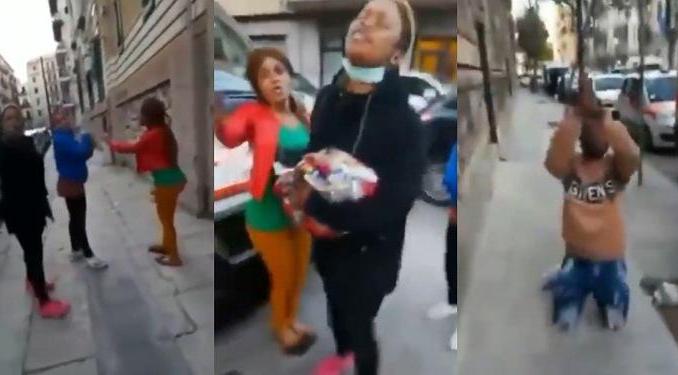 A video serving rounds on social media has captured the moment a Nigerian man was cussing out a lady after a DNA test revealed that he is not the father of the baby she tried pinning on him.

Recall that the Nigerian man and his pregnant girlfriend were recently spotted publicly engaging in a verbal fight over the lady’s 8-month-old pregnancy.

The estranged lovers argued about the paternity of the child. While the pregnant lady insisted that the Nigerian man is the father of her unborn child, he denied being responsible for it.

The man alleged that while he was away for a job 9 months ago, he got reports that she was cheating on him.

The pregnant lady who later held on to the man’s cloth revealed that she asked for a DNA test but he refused.

However, a DNA test has now been carried out and revealed that a Caucasian (white) man was the father of the child.

The aggrieved man was seen cussing out the lady for trying to pin another man’s baby on him.

In response, the lady defended herself by saying she wasn’t the one that started the act of pinning babies on men who are not biologically related to them.

"No be me start am "- Nigerian lady defends herself after DNA test revealed that the man she tried pinning her baby on is not the father of the child… pic.twitter.com/zJfIA5l3WH