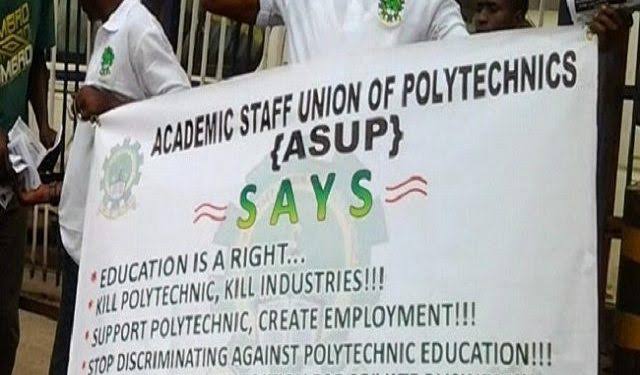 The Academic Staff Union of Polytechnics, ASUP has concluded an arrangement to embark on an indefinite industrial action on 6th April, 2021 across the country until the union’s demands are made.

The union in its 99th National Executive Council, NEC meeting held at Hassan Usman Katsina Polytechnic, through its President, Anderson Ezeibe, in a media briefing with journalists on the status of engagement between them and government in Katsina state, recalled that the Union issued a 15-day ultimatum to the government in March 2020 outlining several issues bordering on the culture of neglect by the government on issues affecting the technological education subsector with specific instances were cited in the refusal of the government to respect the provisions of the ASUP/FGN agreement of 2010, non-payment of salaries in some state owned institutions, non-payment of the 10 months arrears of the new minimum wage to its members in Federal Polytechnics.

Comrade Anderson specifically mentioned that, the shutting down of the global economy due to the impact of COVID-19 precipitated a suspension of the proposed action as the professional competencies of the members formed part of an indispensable pool of resources in the fight against the pandemic.