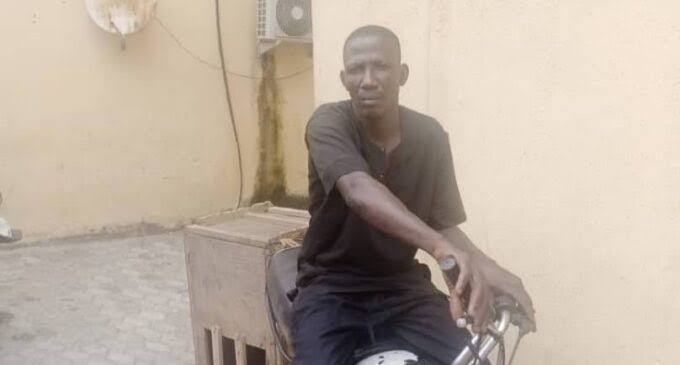 A Lagos resident, identified as Yusuf Saliu, has been arrested by officers of the state police command for allegedly being in possession of a stolen motorcycle.

He said the motorcycle is one of those allegedly stolen when a police post was invaded during the #EndSARS crisis.

Several police stations across the country were attacked in October 2020, after the protests against the now disbanded special anti-robbery squad — under the #EndSARS campaign — turned violent.

In Lagos, 10 police stations were razed by hoodlums during the crisis.

In the statement yesterday, the police spokesman said the suspect was found riding the motorcycle.

“The police operatives attached to Mushin Division of the Lagos State Police Command have arrested one Yusuf Saliu, m, 32, at Daleko Area, Mushin, with one of the suspected stolen motorcycles at the Dalemo Police Post during the October 2020 violent EndSARS protest in Lagos State,” the statement reads.

“The suspect was arrested on 22nd March, 2021, at about 9.30pm, based on an intelligence on the activities and involvement of the suspect in the vandalisation of the Daleko Police Post; and the suspect was seen riding the said bike with Reg No. APP 476 Q.

“The said bike has been recovered and the matter has been transferred to the Command’s Special Squad for further investigation on the order of the Commissioner of Police, Lagos State, CP Hakeem Odumosu.”