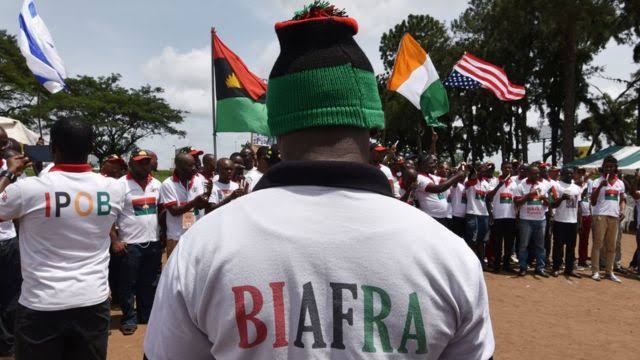 Under a policy document that has now been withdrawn for review, any member of Biafran separatist groups wishing to apply for asylum on the ground of “political persecution” must be physically present in the UK.

The applicant must also not be considered a security risk to the UK.

SKYTREND NEWS had, in an exclusive report, revealed that the UK Visas and Immigration (UKVI) had released new guidelines to its decision makers on how to consider and grant asylum applications by members of Biafran secessionist groups.

Asylum is to be granted to “persecuted” members of the Indigenous People of Biafra (IPOB), which has been designated as a terrorist organisation by the Nigerian government, and the Movement for the Actualisation of the Sovereign State of Biafra (MASSOB).

The Nigerian government has kicked against the decision while IPOB has declared that what it wants is an independence referendum not an asylum.

Although the UK has said that it is bound by certain conventions to protect those in need, the decision is seen as a kick in the teeth for the Nigerian government.

The policy document has now been withdrawn for review with an update expected shortly, Lagos-based Radio Now reported.

In the ‘Country Policy and Information Note Nigeria: Biafran secessionist groups’ seen by TheCable, the UKVI, a division of the Home Office, stipulates that the credibility of every application must be assessed under ‘Asylum Policy Instruction’.

The policy states: “An asylum claimant will be granted asylum in the United Kingdom if the Secretary of State is satisfied that:

he is in the United Kingdom or has arrived at a port of entry in the United Kingdom;
he is a refugee, as defined in regulation 2 of The Refugee or Person in Need of International Protection (Qualification) Regulations 2006;
there are no reasonable grounds for regarding him as a danger to the security of the
United Kingdom;
having been convicted by a final judgment of a particularly serious crime, he does not constitute danger to the community of the United Kingdom; and
refusing his application would result in him being required to go (whether immediately or after the time limited by any existing leave to enter or remain) in breach of the Geneva Convention, to a country in which his life or freedom would threatened on account of his race, religion, nationality, political opinion or membership of a particular social group.

A claimant who makes an asylum claim and then leaves the UK will no longer be considered.

The burden of substantiating a claim lies with the claimant who must establish that they qualify for international protection, the guidelines state.

Paragraph 339 of the UK Immigration Rules emphasises the burden on the claimant to provide
evidence and the duty of the caseworker to assess the information put forward “in co-operation
with the person”.

The UKVI says its caseworkers must “examine, investigate and research the available evidence and, if appropriate, invite submission of further evidence, although the caseworker may well be in a better position than the claimant to substantiate aspects of the account”.

Evidence to be considered in dealing with asylum requests includes:

Screening Interview (SIR)
Statements made to an Immigration Officer prior to the claim being made, or information supplied when they applied for a visa
Preliminary Information Form (PIF)
Asylum interview (SEF – Statement of Evidence Form)
Other evidence submitted by the claimant, e.g. written statements, newspaper or internet articles, witness statements from family or associates, police or medical reports, political party membership cards
Country of origin information (COI)
Files relating to previous applications by the claimant or their relatives
Passports: where available, checked for entry/exit stamps, visas, to confirm the claimant’s immigration status and history
‘Section 8’ type conduct prior to asylum claim being lodged
When considering the weight to attach to any overseas documents (for example, official certificates or arrest warrants), the claimants are required to show that those documents can be relied on.

Caseworkers are to “assess whether a document is one on which reliance can be placed after looking at all the evidence in the round”.

In practice, this means that “a document must be considered together with other evidence, oral and written, that goes towards establishing the particular material fact”.

The Nigerian government is unhappy with the UK because Biafran separatists are officially classified as terrorists.

However, there are legal statutes upon which Nigeria’s former colonial masters might have based its decision.

The UKVI says the 1951 Refugee Convention is the primary source of the framework of international refugee protection, originally limited to persons fleeing events occurring before January 1, 1951 and within Europe.

The 1967 Protocol gave the convention universal coverage and has since been supplemented in the European Union and other regions “by a subsidiary protection regime, as well as via the progressive development of international human rights law”.

Another is the European Council Directive 2004/83/EC which was transposed into UK law through The Refugee or Person in Need of International Protection (Qualification) Regulations 2006 and the Immigration Rules.

Other statutes are: Part 11 of the Immigration Rules setting out the provisions for the consideration of asylum claims and reflecting UK obligations under the Directives; and section 8 of the Asylum and Immigration (Treatment of Claimants, etc.) Act 2004 which requires decision-makers to take into account the claimant’s conduct when applying the benefit of the doubt to unsubstantiated material facts.