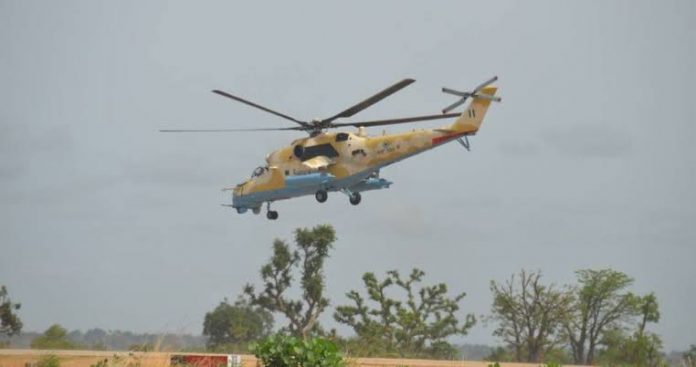 Some soldiers have been killed after a fighter jet belonging to the Nigerian Air Force reportedly fired a bomb on ground troops in Mainok, Borno state.

Military sources told newsmen that the air force “accidentally” hit the wrong coordinates while targeting Boko Haram insurgents who had attacked the troops on Sunday.

Edward Gabkwet, air force spokesman, told TheCable the incident is being investigated when he was contacted on Monday.

The insurgents had attacked a military base in Mainok and reportedly overpowered the troops who called for reinforcement.

The truck which was sent for reinforcement was targeted and shelled by the air strike following a flawed intelligence, sources said.

One of the soldiers in the affected area told TheCable: “They (Boko Haram) came with heavy machines, about four MRAPS (mine-resistant ambush protected) vehicles and they overpowered the ground troops.

“Troops sent signals for air support and when they came, it missed the main coordinates; where the air force shelled their bomb was on the location of troops instead of that of Boko Haram.

“The aircraft had to turn back. They realised that they mistargeted (and) most of the soldiers started running inside the bush.”

Gabkwet told newsmen he also saw a video from the affected scene and that the air force is investigating the matter.

Airforce killed our ground soldiers thinking they were Boko Haram.

This is usually the outcome of recruiting or taking soldiers and officers by godfatherism… Killing own troops… pic.twitter.com/I9uMSiHnU0