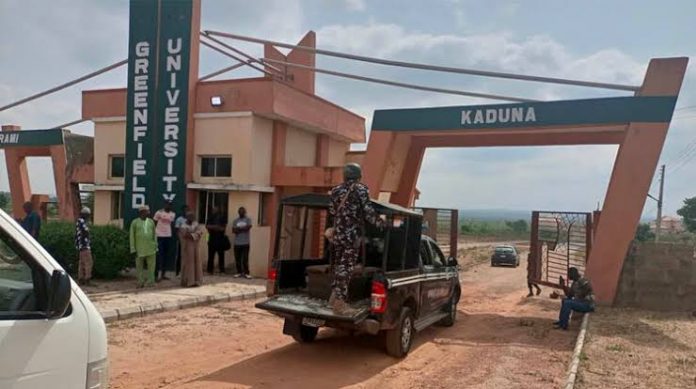 There’s an atmosphere of tension in the country as citizens await to hear from the governments after kidnappers of 22 students and staff from Greenfield University in Kaduna yesterday morning threatened to kill the remaining students, 17 of them held in captivity if the government fails to meet their demands on Tuesday(Today).

You would recall that about 22 students and staff were abducted on April 20 when the hoodlums invaded the school about 8:30 pm.

Having been contacted, the abductors demanded N800 million ransom for the release of the students and staff.

The management of the University appealed to the government and people of goodwill who could be of assistance to come to their aid as the situation surrounding the kidnap of the university students was becoming overwhelming.

However, while negotiations were still ongoing, five of the students were killed by the abductors.

Speaking in an interview with the Voice of America (VOA), Hausa service, one Sani Jalingo who claimed to be the leader of the abductors, warned that if the state government or parents of the students fail to pay a ransom of N100 million and provide them with 10 new Honda motorcycles by today, the remaining students would be killed.

According to Jalingo, 17 students, comprising 15 girls and two boys, were in his custody, including the grandson of the late Emir of Zazzau, Alhaji Shehu Idris, whose name was given as Hamza.

He said “You are speaking with the abductors of Greenfield students. We heard the comments of the Kaduna State governor that he will not pay ransom to bandits to purchase additional arms.

“If they fail to bring N100 million and 10 brand new Honda motorcycles known as Boko Haram by Tuesday, I can assure you they will use trucks to evacuate the bodies of the remaining students”.

Jalingo further stated that the families of the abducted students had already paid N55 million, but they had spent the money to feed the students.

Meanwhile, Governor Nasir El Rufai of Kaduna state had reiterated his administration’s stance not to negotiate with bandits.

According to the governor, his job is to enforce the law and help to prosecute people who commit offences.