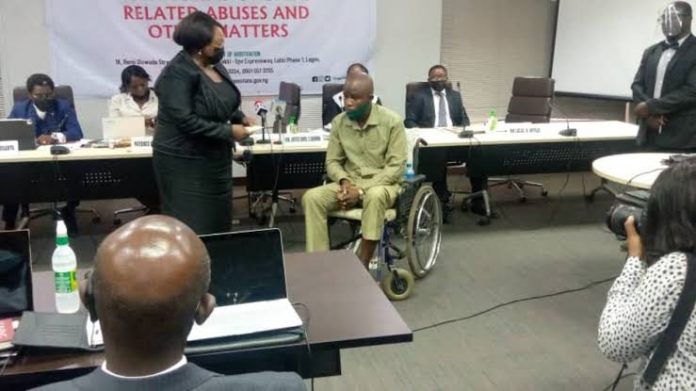 There was drama during the sitting of the Lagos state judicial panel yesterday, when Ndukwe Ekekwe, a petitioner who was paralysed as a result of police brutality, was awarded compensation.

Doris Okuwobi, the panel chairperson, awarded the sum of N7.5 million to the petitioner yesterday.

The petitioner, who is a shop owner at Alaba international market, had told the panel how officers of the now-disbanded special anti-robbery squad (SARS) came to his shop in 2018 and threw him from a two-storey building, leaving his spinal cord damaged.

Immediately the announcement of the compensation sum was made, the petitioner and his mother reacted, saying the money is not enough.

The petitioner, who appeared before the panel on a wheelchair, said he spent more than N30 million to treat himself, adding that his shop has become empty.

“Maybe they think I’m an illiterate. All those investments, I sold all of them. My shop is currently empty. I sold everything. I spent everything to take care of myself in the hospital. What is N7.5 million?” the petitioner queried.

The aged mother of the petitioner also created a mild drama at the panel as she was shouting, saying she had also sold some landed properties to ensure that her son was able to get back on his feet.

Amid the drama, the petitioner and his mother angrily left the courtroom to continue their protest.

Outside the courtroom, the petitioner’s counsel appealed to him to enter the courtroom and collect his cheque from the panel.

Presenting the N7.5 million cheque to the petitioner, Okuwobi urged him to accept the compensation.

The panel also presented a compensation of N3 million each to Andrew Okoh and Isaac Adesina.

The two petitioners — Okoh, a driver, and Adesina, a passenger — had told the panel that a police officer shot them along Egbeda-Idimu road, Lagos, for failing to give him a bribe.