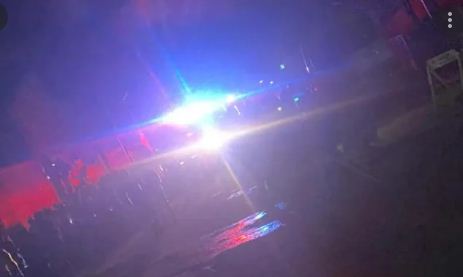 There was a fire outbreak at the Synagogue Church of All Nations located in the Ikotun area of Lagos State yesterday night.

It was gathered that the fire, which gutted a building in the church’s premises, started around 11 pm.

The fire incident happened on the night of the candle procession in honour of the late founder of the Church, Prophet Temitope Joshua popularly called T.B Joshua.

Members of the church, who had attended the night of tributes and candlelight procession in his honour, were seen scampering to safety during the fire incident.

As of the time of filing this report, details of the fire incident are sketchy.

It was learnt that firefighters arrived at the scene of the fire incident around 12:19 am this morning.

An official of the church, Uche Peter, said the fire had been put out before the arrival of the fire service.

“An electrical spark at the control room caused the fire. It happened after the candle night procession,” he added.

The pastor, televangelist, philanthropist, leader and founder of The Synagogue died on June 5 at the age of 57.

His widow, Evelyn Joshua, led the candlelight procession at the SCOAN Faith Resort in the Ikotun area of Lagos.

SCOAN had announced that TB Joshua would be laid to rest on Friday, July 9, at the church premises in Lagos.