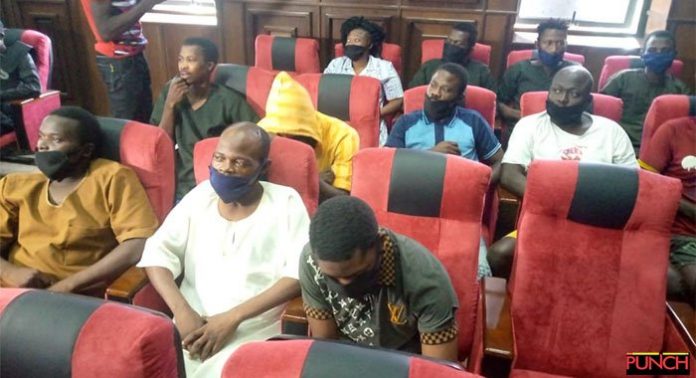 The Federal High Court, sitting in Abuja, yesterday, granted bail to the 12 persons that were arrested at the residence of Yoruba Nation activist, Sunday Adeyemo, popularly known as Sunday Igboho.

Justice Obiora Egwuatu admitted the Applicants to bail, after he overruled the Department of State Service, DSS, which opposed the release of four of the 12 persons who have been in detention since July 1.

The DSS had claimed that its investigations revealed that the four detained associates of Igboho – Amudat Babatunde, Abideen Shittu, Jamiu Oyetunji and Bamidele Sunday – were deeply involved in the stockpiling of arms.

It, however, did not oppose the release of eight others – Abdulateef Ademola Onaolapo, Tajudeen Irinyole, Diekola Jubril Ademola, Ayobami Donald and Uthman Opeyemi Adelabu – it said had minimal involvement in Igboho’s alleged criminal activities.

In his ruling, Justice Egwuatu held that the Constitution empowered the court to exercise its discretionary powers to grant bail to all the Applicants.

Though the DSS did not oppose the unconditional release of the eight Applicants, Justice Egwuatu gave them bail in the sum of N5 million each, with two sureties in like sum.

The court, on the other hand, admitted the other four Applicants, whom their application was opposed, bail in the sum of N10 million each, with two sureties in like sum.

The court held that the sureties must be residents in Abuja, adding that one of them must be a civil servant not below grade level 12.

It held that the civil servant must submit a letter of employment and last promotion letter, as well as tender a passport photograph.

All the sureties were directed to submit an evidence of payment of tax for the past three years and also depose to an affidavit of means.