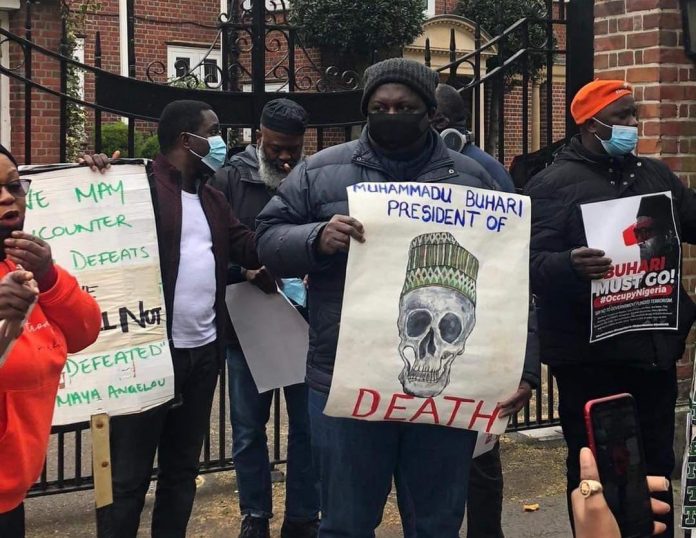 President Muhammadu Buhari has reportedly called police officers in London to prevent Nigerian protesters from gathering in front of the Nigeria House at Trafalgar Square in London, United Kingdom.

In a video obtained by SaharaReporters, some peaceful protesters who were demanding Buhari’s return to Nigeria were yesterday evening challenged by the British police.

After attending the Global Education Summit on Financing Global Partnership for Education (GPE) 2021-2025, the Nigerian President stayed behind to see his doctors, even as resident doctors in his country have gone on strike.

The police officers were seen speaking with the Nigerian protesters, seemingly persuading them to stop protesting there.

Also, more officers were seen arriving in police vans while a Nigerian woman was heard screaming without fear, the demands of the protesters which included the President returning to Nigeria and putting an end to the killings in the West African country.

A police officer was heard saying, “The cameras are on. Someone was sticking out last night, you just got lucky,” and when he was asked if he upholds the law, he replied, “I am without fear or favour”.

One of the female protesters said, “They are killing in our country, they are killing our people, Buhari is here with Boris Johnson and I am surprised that Prime Minister will condone such, condoning corruption and murder, it is terrible.