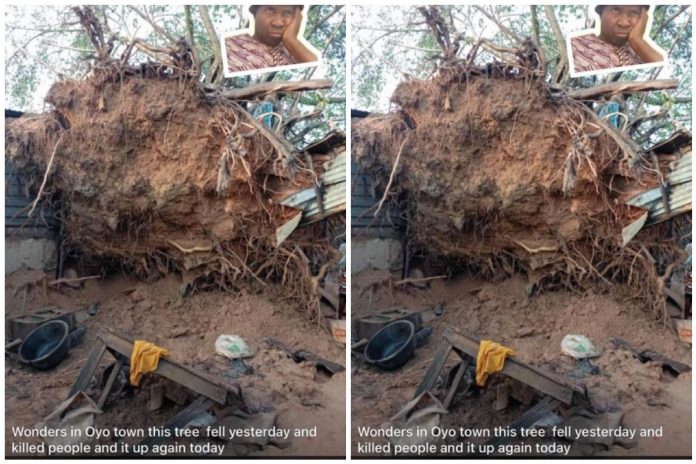 Mystery, each time it happens, makes history. The rich history of Africa rides so much on some of the historic happenings and events that have occurred.

One of such cases is what the Saabo Community, Oyo town in Oyo state witnessed on Monday, 4th of October 2021, at about 6:30 pm when a tree, popularly referred to as ‘Igi Odan’ fell due to a heavy windstorm.

The tree was said to have been planted about a hundred years ago by a sango worshipper, Sangoleke Ojelabi.

The bizarre sight had turned the scene into a tourist attraction as residents trooped to the place to see the reported wonder. 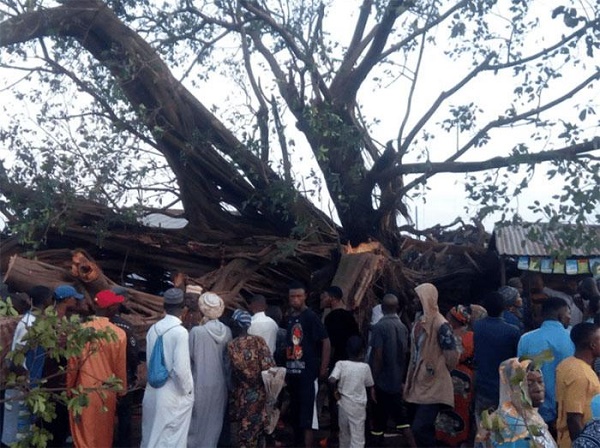 This development has raised an ongoing conversation between divinity, science and mystery.

It was, however, learned that Ojelabi did not plant the tree for worshipping any deity but to provide shade for people.

The tree, which is close to a popular foodstuffs market served as a relaxation spot for motorcycle riders, shuttle buses operators as well as traders, killed four people and left one other person injured.

A woman, who came to the market with her child to buy meat, under the tree, got trapped under the tree when the tree fell even though the meat seller escaped with some injuries.

Similarly, a student of the Federal College of Education, SPED, Onifade Kafilat lost her life.

Others who lost their lives are; Bose Taiwo; Abdul-Yekin Aduroti-Allah and a 13-year-old boy identified as Dare.

The only injured victim was identified as Soliu.

Bodies of the dead were later recovered after four saw millers had tried in vain to cut the branches.

Botched attempts to cut down tree

The Chairman of Saabo Market in Oyo, Alhaji Akeebu Alarape, while speaking on the incident explained that the tree has been there for over a hundred years, adding that there have been several failed attempts to cut the tree down.

But chairman, Sooro LCDA, Mr Seun Oguntona, who debunked the rumour that the tree was fetish, advised people not to take shelter under any tree when it rains.

He added that the man who planted the tree died about 30 years ago adding that though the man worshipped Sango while alive, the purpose of planting the tree was to provide shade for people.

Residents of the community were left in awe when on Tuesday 5th September, at about 6:30 pm, the leftover trunk of the tree stood up again, almost exactly after 24hours. 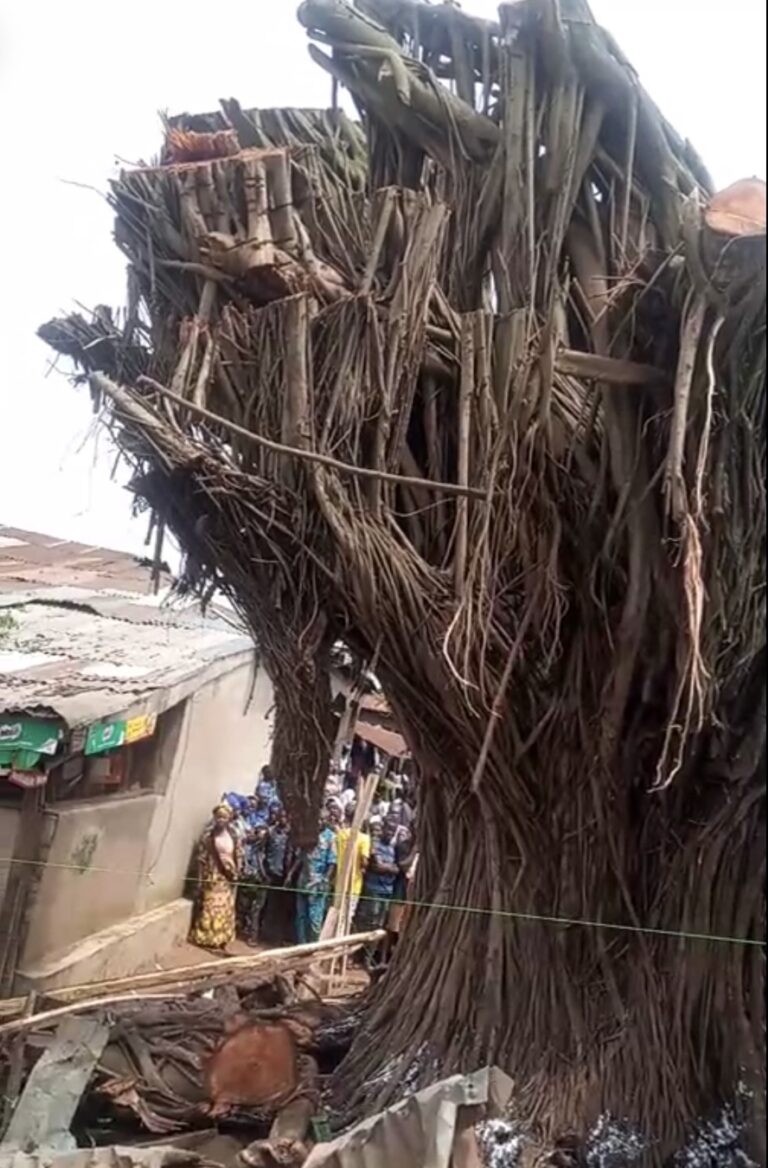 A resident, Wasiu Kareem said: “What baffles all of us about the tree is that it stood up at the exact time it fell.”

Also corroborating Wasiu’s claim, a driver, Saheed Balogun, who witnessed the incident, explained that he was loading his vehicle at the park not far from the tree when there was loud vibration from the tree and it went back to its standing position.

Balogun said: “It happened in my presence. I was loading my car and then the tree started shaking, next thing, it stood up again.”

Pictures and video taken at the scene of the event had confirmed earlier that the tree was uprooted and its branches trimmed.

When Vanguard visited the scene of the incident, it was observed that the tree trunk stood exactly where it fell.

A resident, who pleaded anonymity, said that after the tree fell, a calabash was seen under the tree and that later in the evening, an unidentified man drove to the scene and took the calabash away.

He said that immediately after the fall and rise of the tree, many individuals, who believed it was not a natural occurrence, had flooded the scene to sprinkle salt on it, while others built a barricade around it, with a white cloth.

However, the Alaafin of Oyo, Oba Lamidi Olayiwola Adeyemi III while at the scene of the event ordered that the barricade be pulled down and nothing be done to the tree. 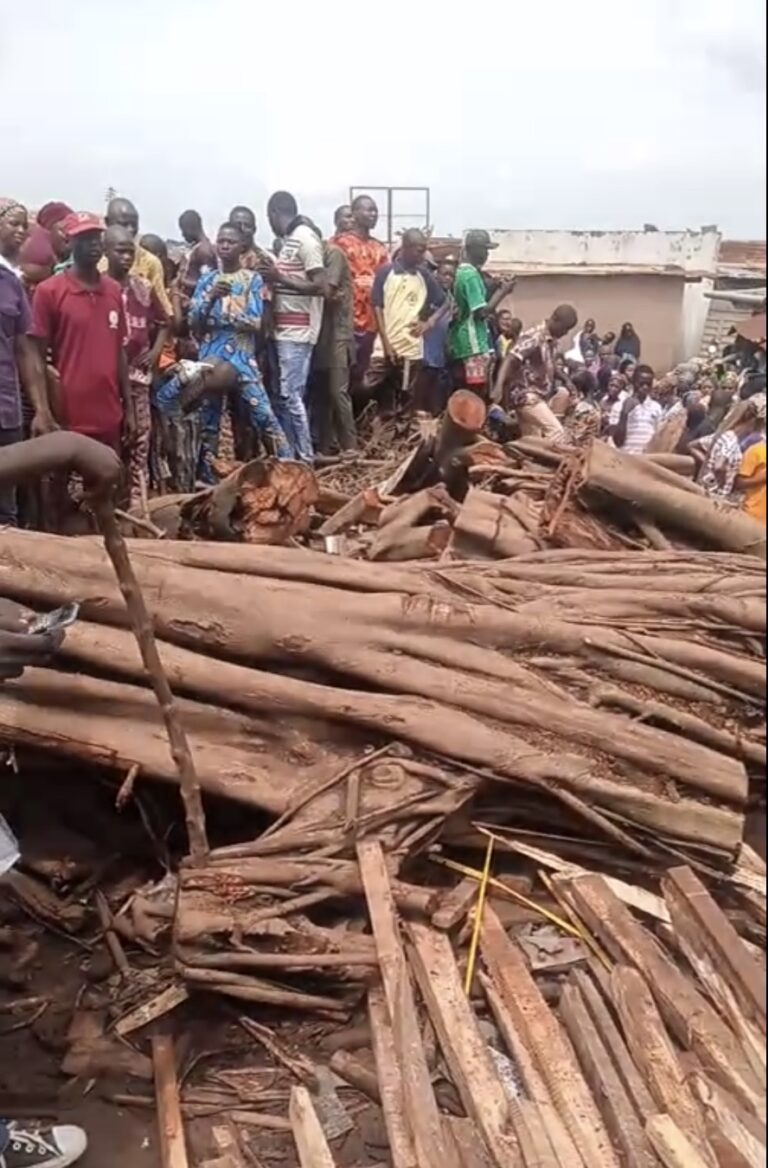 The Alaafin said: “In the days of old, our forefathers used trees to demarcate family compounds, communities, territories, borders and used traditional rites and spiritual powers to protect them against any incursion or invasion and some serve as points of the family deity.

“The location of this tree is at a junction (orita) in Sabo Market, but before the area was filled with bushes, it was an entry point to Oyo called Abata Emo. As is always the practice in ancient times, traditional rites and spiritual powers were put at the tree spot to prevent incursions into the town. The families of those late Sango priests, who held a vigil in the area, have related the history of their forefathers and the tree.

“Presently, the family of the late Baba Sangoleke Ojelabi still lives there and they are the caretakers of the area.

“Only our ancestors could have the answer. Today, many of our youths and families have embraced the other religions and have abandoned our ancient practices hence there is a dearth of knowledge of the significance of some trees. There are trees and there are trees; in Yorubaland, we all know every tree has its story. They are indicators of divinations but let us be guided, we must accept the fact that we cannot explain everything by science.

“Every family has its deity, we should not just allow modernisation and supposed civilization and their complications get the best of us, all the people who take roots and herbs understand the efficacy of those herbs irrespective of the facts that we have many hospitals which only can treat things that they perceive they can see.

“When it comes to spirituality, we all know that the drugs prescribed by doctors and scientific knowledge have limits. We should not because of our new religious ideologies belittle our culture and tradition when in other climes they are preserving theirs.”

There’s no mystery about the tree— Baba Sango’s son

Also speaking, one of the sons of the late Baba Sango, Babatunde, said that he saw on Facebook that someone said he removed a pot from a part of the felled tree. 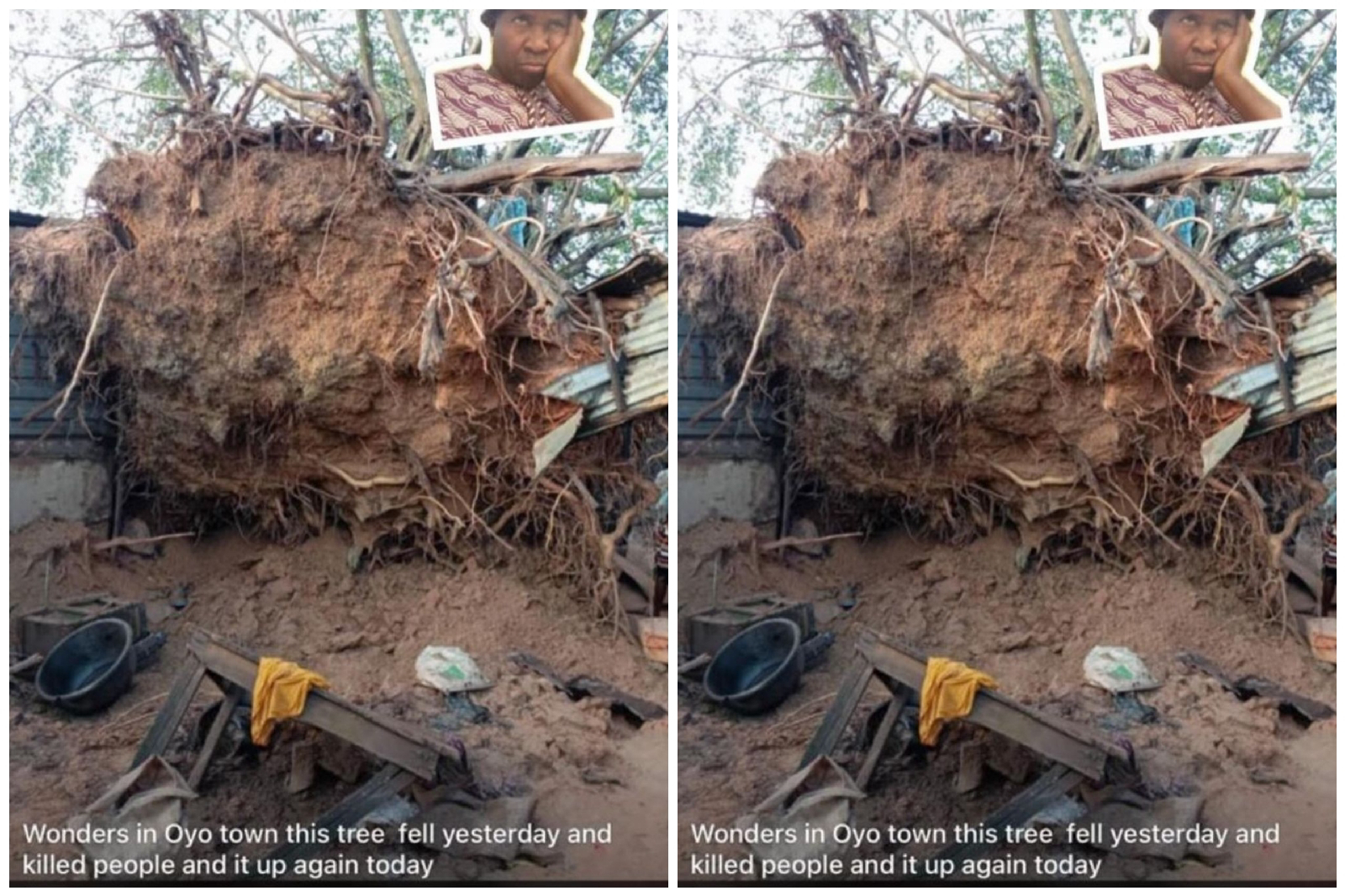 He said: “Our late mother, many years ago, put a pot beside the tree.

“She was always pouring water in it so that passers-by, who might be thirsty, could scoop water from it and drink.

“After many years, the creepers that grew from the branches encumbered the pot and so it was no longer visible. It was the pot that had been swallowed by the trunk of the now very big tree that the Facebook man said he removed from the tree.

“There is no mystery at all about the tree. Our father did not do anything supernatural to the tree till he died.”

Also speaking, the Alago of Ago Oja Land, Chief Ganiyu Busari, said that the fall and rise of the tree was a mystery and mythical one, adding that the tree had been beneficial to the people for ages based on the spiritual power that late Baba Sango must have infused in the tree.

But in a swift reaction, one of Baba Adeleke’s sons, Mr. Munmini, countered Alago Oja’s claim, saying: “I was not surprised at what happened. I cautioned those cutting the branches of the tree that people around should be driven away because the tree would return to its base.