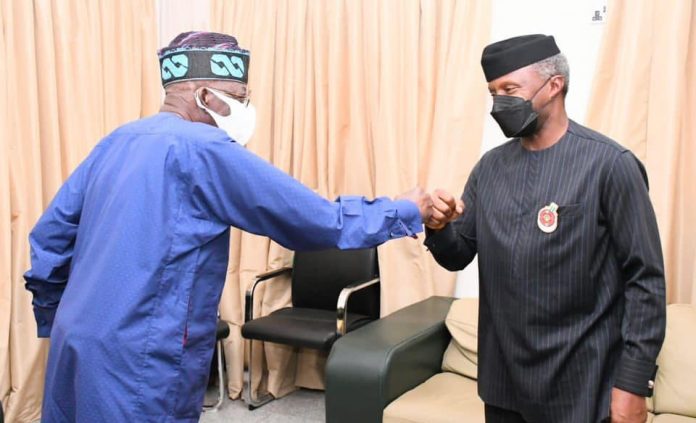 With the recent unsolicited clarification by Babafemi Ojodu, a seasoned journalist and a top aide in the office of the vice president, H.E Oluyemi Osinbajo, it is an ominous sign that Osinbajo will more likely than not plunge in, head long into the presidential race of the All Progressive Congress.

Since Senator Ahmed Bola Tinubu, as expected since 2014, of his spear heading a grand alliance that whittle down the power of incumbency of the People Democratic Party, has now declared to contest for the party’s top position, the obvious scenario of a two powerful horse race of a Tinubu/Osinbajo combo is as sure as a cold in any harmattan season.

However, such political reality would be more than a phenomenal dilemma, that is more complex, than what many presumably altruistic and unbiased analysts continue to paint.

Most of which and whom continue to look at the smaller pictures and not the ubiquitous bigger pictures.

The intricacies here are too great and grave.

For instance, it would appear that some yet to be ascertained elements and vested interests are just trying to use this as a strong weapon to divide the votes, loyalties and sympathies of West or Yorubas to be specific. In the same fashion ‘they’ did with Samuel L Akintola against Chief Obafemi Awolowo and the cataclysm that ensued there after, from which the Yoruba nation has not recovered till date.

Bear in mind that before that imbroglio, the West was a leading light not only in Africa but the world at large, because at that time even France was only using glass mirror to see its reflections, while the West had a Television screen to watch itself and others.

While, the princes of the Al Saud’s dynasty of Saudi Arabia, were known to frequent, the Western region in the 1960s, for their medical needs.

For academic purpose, let even presume, as if we were privy to his inner recesses and decisions, that Osinbajo accepted to run against his erstwhile boss, without his express permission and blessing. Then, it could be said that Osinbajo has unwittingly and inadvertently undermines the First Laws of Power.

The classical consequence of this is that, it would have a negative spiral effect on his ethnic nationality and therefore such nationality would be portrayed in bad light as not being trust worthy when it comes to the appraisals of differences between self interest, group interest and corporeal interest, because of the inordinate quest for the power it brings.

Most especially, in a nation, where it is a primordial inclination and supplication to hastily use the actions or inactions of just a single individual to judge millions of others. Needless, to state therefore that the treachery of Akintola against his boss Awolowo, would be given a novel impetus, as not being a one off event but rather an endemic, pathological genetic defect in every potential man or woman from that particular ethnic nationality.

Meanwhile, Osinbajo being an acclaimed or certified pastor, makes the recurring decimal that would be played by religion, a front burner issue. As a clergy, it is believed in diverse quarters that Osinbajo has a wide examples embedded in the the Holy Writ, he carries about.

For instance, it is believed, that a true child of the Kingdom, no matter what, is not supposed to usurp power and hierarchy but rather be subjected without any let or hindrance under the anointing of such.

It is a streetwise saying that a “sendee, cannot be greater than the sender”. Precisely, why though John the Baptist appeared to the nation of Israel before Christ, yet when the time appointed for leadership, ascension and enthronement was ripe, he proclaimed of Christ- “thou must increase, while I decrease”.

We cannot deny, nor pretend, as if we were not aware ab initio that Tinubu actually “sent” Osinbajo as a front runner to hold the fort, while he holds his back before his coming, in a bigger scale and scope to declare his obvious age long intentions.

In other words, this is the time for Osinbajo to prove to his constituencies of faith and clan, that truly he is trust worthy of what he has been preaching to his congregants for ages..that David despite being anointed king did not count himself worthy, usurp or contest for the throne not until the king, was naturally taken off the scene.

The unintended consequences of doing otherwise by declaring to run against Tinubu, is already simulating several amateurish playlets on the streets, seemingly ready to burst out in singsong ,” Et tu Pasto, fa,la,la,la,,lala,lala” .

Meanwhile, the most outstanding nightmarish aspect of it, is that the emergence of the candidature of Osinbajo, would only serve the narrow interest of certain known and unknown elements in the power matrix of Nigeria, who had hitherto held this nation by it’s scrotum.

Because, they would only use him as they had purposed from the onset as being merely propped up by them to be their puppet.

Bear in mind that, he would be of no consequential difference to Chief Olusegun Obasanjo, in his first term in office in 1999. As of which time, he had no political structure nor base while ascending the zenith of such a political career. And hence, like any other seeds that falls on a stony soil, it would be choked up, when the tide arises.

Of a truth, we should all be concerned, most especially having considered more carefully the antecedence, precedence and antics of certain elements in other parties working assiduously for the emergence of Osinbajo, that by the way, the probability of working to perpetuate a regional hegemony beyond 2023, is still as active as Mount Fuji volcanoes.

Going by the fact that the emergence of Osinbajo, is an appeal to the politics of delirious divide to conquer synonymous with party politics in Nigeria, right from the First Republic.

In other words, there is no iota of doubt that, the emergence of Osinbajo in the presidential race, would be a storm in a tea cup, greatly dividing the fragile centeripetal force of the party into diverse irreconcilable splinter groups and the time for perfect, peaceful reconciliation would be too short before the generation elections.

And if PDP, as it seems likely, with the last desperate throttles of H.E Abubakar Atiku, whose age and acuity, from all intents and purposes, can not go further than this particular elections, presents a formidable old political horse as a candidate, definitely it would be a cinch for such a party or opposition candidate.

That was the precise scenario upon which Pa Michael Otedola came to power in Lagos in the short lived Third Republic.

But a cohesive APC could have been extremely hard to defeat or dislodge.

So, we can simply second guess the game of strange characters like former governor of Niger State, Aliyu Babangida, backing Abubakar Atiku for the PDP presidential primary, while campaigning vigorously for the emergence of Osinbajo in APC.

Can a servant serves two masters, this would be a veritable rhetorics for the mercurial self proclaimed “Chief Servant”, as not being more than a premeditated, well planned, high level dark politics and vicious political brinkmanship known to all consummate chess players as zugzwang.