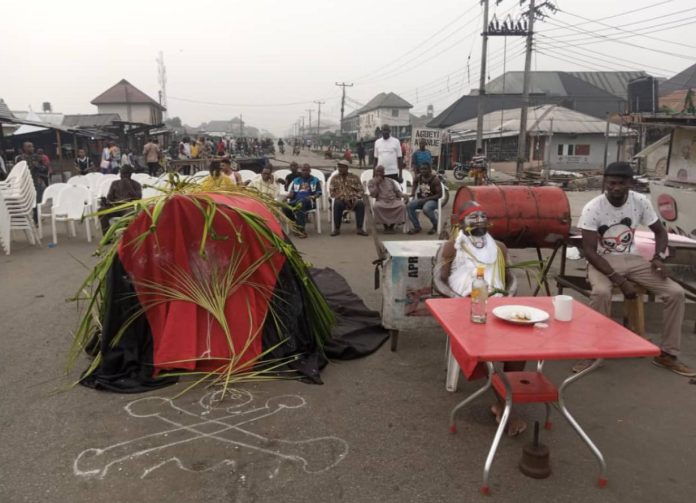 Ifiekporo community, Warri south local government area of Delta State, in the early hours of this morning, mobilised to shut down the portion of Ode Itsekiri road leading to the depot of Matrix, Pinnacle oil and Gas , AYM Shaffa and several companies in the area over alleged failure by the companies to sign a Memorandum of Understanding with the community.

Public relations officer of the community, Mr. Monoyo Edon who spoke to newsmen at the ground of the protest said the companies had failed to sign an MoU with the community for almost ten years of their operations.

” We are not asking for too much, just sign an MoU with the community but they have been avoiding this. We have written several letters to them and even gave them ultimatum on this. “, he said.

No vehicle could drive through the portion of the road blocked by the protesters.

Some of the other companies are Keonomax, Parker oil and Gas, Salbas oil and Gas and others.

The protesters mounted what appeared like a shrine with a priest sitting close and occasionally making incantations.

They said the protest would continue until the firms heeded to their demand for an MoU with the Ifiekporo community.