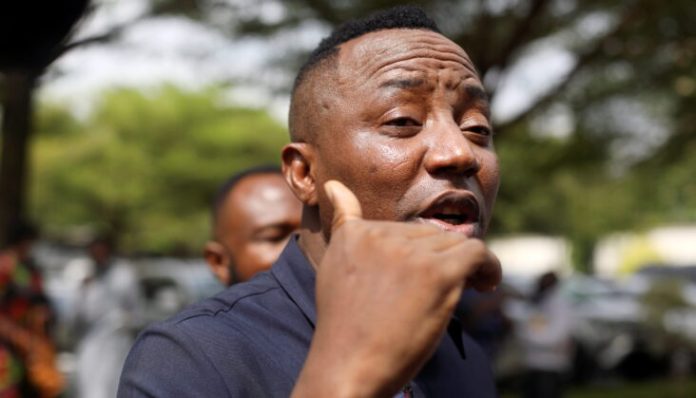 Omoyele Sowore, an activist, has instituted a suit against Ned Nwoko, Nigerian businessman, for allegedly violating his fundamental human rights.

In the suit filed through his lawyer, Tope Tomekun, before a federal high court in Abuja, Sowore said officers of the Nigeria Police Force (NPF), acting on the orders of the federal capital territory (FCT) police commissioner, laid siege at the Abuja court of appeal on February 24 and arrested him at about 4 pm.

In an affidavit in support of the originating summons, the activist said he was taken to the office of the defunct special anti-robbery squad (SARS) unit of the police, where he was detained for several hours.

The NPF, inspector-general of police (IGP), FCT commissioner of police, and Ned Nwoko are the first to fourth respondents, respectively.

“That it was while I was in the police custody that I was presented with a petition by officers of the 1st respondent which was written by the 4th respondent to the 3rd respondent against me alleging publications of news defaming his character,” he said.

Sowore said he was released at 9 pm the same day.

“I knew all along that I did not at any time breach any known law or commit any crime to justify my arrest and eventual detention by officers of the 1st respondent,” the affidavit reads.

Sowore said although he is the founder of Sahara Reporters, an online news agency with its headquarters in New York, USA, the organisation is a legal entity distinct from him.

“That I do not in any way determine the stories that are published on the Sahara Reporters platform,” he said.

Among the reliefs sought, Sowore is praying the court for a declaration that his arrest and detention amounts to a breach of his right to personal liberty and freedom of movement as guaranteed under sections 35(1) and 41(1) of the constitution.

He is also asking for an order of the court, “mandating the 1st, 2nd, 3rd and 4th respondents to issue an apology to the applicant, to be published in two reputable national daily newspapers for the violation of the applicant’s fundamental rights as afore-stated”.

The activist is also seeking an order “directing the 1st, 2nd, 3rd and 4th respondents jointly and severally, to pay to the applicant, the sum of N200,000,000 only, as general and exemplary damages for the violation of the Applicant’s fundamental rights as afore-stated”.