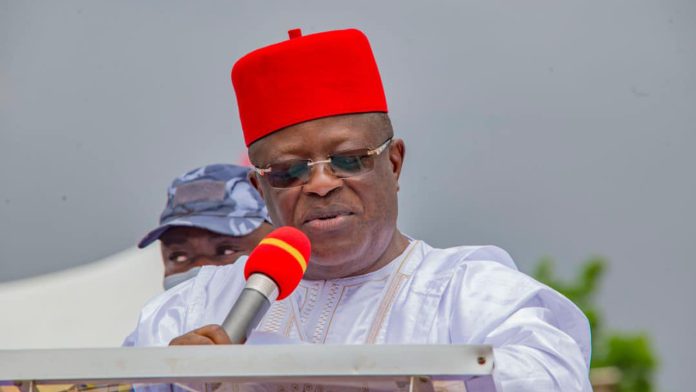 Governor David Umahi of Ebonyi State, today stressed that he remains the Governor of the State not minding the ruling by the Federal High Court, Abuja

The Court had sacked him (Umahi) and his Deputy, Dr Kelechi Igwe from office and directed that the duo should not parade themselves in like manner.

Briefing Newsmen in his office at the new Government House, Abakaliki, Governor Umahi who described the ruling as “jungle justice that was purchased” noted that the ruling was not a good development for the Judiciary.

In his words: “I am still the Governor of Ebonyi State and there is no tension at all. In the first place, there is no constitutional provision for any hatchet man to remove a governor.

“There are three ways whereby a governor can vacate his office: it’s either by death, resignation and impeachment. There is no other constitutional provision that empowers a hatchet man to turn the Constitution upside down.

“I have listened to the judgement of Inyang Ekwo and it’s very obvious that he was on a mission. He was making all effort to upturn the rulings of the Appeal and Supreme Courts, on issues like this.

“We have heard the rumours before now that he was determined to give judgement against all known laws and the Constitution, first to embarrass the APC, and to equally embarrass the federal government.

“It’s obvious that the ruling this afternoon is clear evidence that this country is in trouble. And let me tell you, this same judge, has over ten cases against the Ebonyi State Government with him. And you can imagine what he is going to rule. “