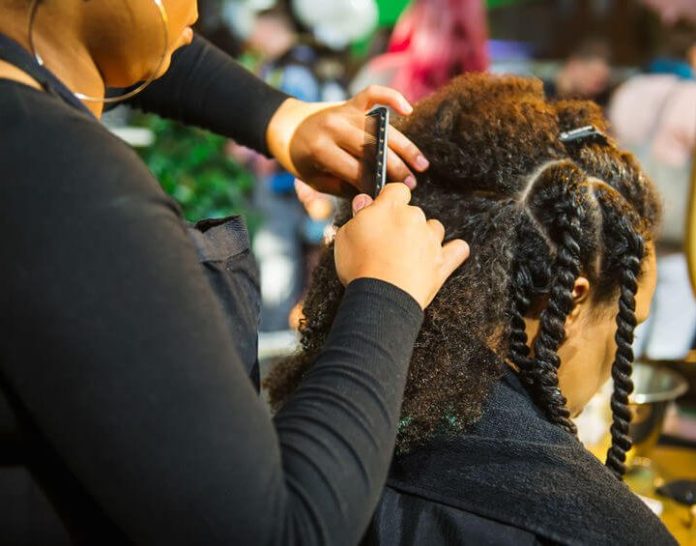 It’s becoming commonplace that women now go on low-cut. That, usually was not the case, even a decade ago.

The pride of a woman used to be the length and lustre of her hair. Traditionally, low haircuts are meant for the menfolk.

In the eastern part of Nigeria, when women lose their husbands, they are made to cut their hair as part of traditional rights.

Similar traditional rites are performed in the Western parts of the country on such occasions.

Now, fashion, convenience and mostly cost, are driving the unknown culture of women shaving their hair to the skull.

Some, even ice the new culture by tinting the hair with different colours of spray paints – a style only known in the past with noticeably wild ladies and musicians.

Today, middle-aged Nigerian women, mostly married, have joined a well known American musician, Anita Baker to popularise a particular style of low hair cut named after her. Others go completely skin-cut leaving no hair at all.

When they are reminded of culture and tradition, they point to rising cost of braiding, weavons and other accessories attached to extension-based hairstyles.

Others cite civilisation, convenience,vogue and fashion as reasons to jettison the old ways of wearing the hair.

However, this newly embraced lifestyle has made hairdressers struggle to make ends meet.

Majority of them in different parts of Lagos complain that they could hardly make N3,000 per day as most of the women patronise barber shops rather than hairdressing salons.

Mrs Abibatu Salami, a hairdresser, who spoke to Economy & Lifestyle said: “The business is getting boring every day.

We hardly see customers who want to make extension-based hair.

All we get are children making simple weavings and didi. Some of my customers have cut their hair saying the prices of hair extensions are high.

With the rising cost of commodities in the market, our union saw reasons to adjust our charges, so we can also cope, but that has worsened the case.

Now we are even struggling to make up to N3,000 a day. This is against the good times when a hairdresser who knows her onions would go home everyday with at least, N20,000 or N30,000.”

Wiser with choices
On a random visit to hair accessories’ shops recently, Economy&Lifestyle discovered shockingly that the cost of Expression Rich brand of hair attachment has risen by 41 per cent from N1200 last year to N1700 currently.

Meanwhile, depending on her economic power, a woman may need up to four or five pieces of these accessories for a complete hair-do.

Mary Osamudiame, a teacher and businesswoman said: ” My salary is less than N50,000. If I make all my purchases for the month, I have less than N3,000 left.

If I decide to make extension-based hair which will require me to buy weavon and other accessories, where will I get the money? That is why I decided to go on low hair cut.

When I saw the rising cost of hair extensions and the cost of fixing them, I saw wisdom in directing my choices appropriately.

In this present economy, as a woman, you have up to N5,000 before requesting the most common service in a hair salon, so if you don’t do the maths very carefully, one will put her family in danger,” she added.

Mrs Adebisi Adebanjo, a civil servant, said: The economic situation has a negative impact on most women’s lives. I have even gone on a low hair cut.

I decided to cut my hair when the prices of hair extensions and hair-making services started rising and I am enjoying it.

I no longer worry about hair making. I just visit the salon every four months to get my hair trimmed.

I use the money for hair extensions on other things,” she claimed.