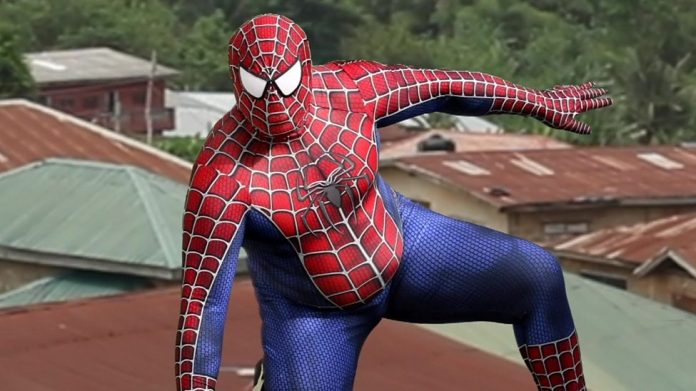 There has never been a better time to call for a cleaner society than now when the impacts of climate change are ravaging the world.

An estimated 11.2 billion tons of solid waste are collected annually worldwide, according to the United Nations — and this poses serious risk to ecosystems and human health, as well contributing about five percent of global greenhouse gas emissions.

To mitigate the effects of climate change, some experts have called for the emergence of community climate champions who are solving environmental problems all over the world — no matter how little.

Jonathan Olakunle, an environmental activist, appears to fit that bill as he embarks on a quest to stop improper waste disposal in his city of Lagos.

Clad in a Spider-Man costume, Olakunle goes around the state picking trash from drainages, market places and anywhere else he sees waste lying around.

“Every neighbourhood in Nigeria needs someone like me, I am Nigeria’s Spider-Man,” Olakunle told the BBC.

“I am not happy with the way I see waste littering everywhere, it has become our normal way of life, which isn’t supposed to be. I started environmental clean up exercise in 2004. I hate dirty environments and I always clean my environment.

“One day I extended what I do in my home outside to the street and that’s how the whole thing began.”

He said he chose the costume because he wants to draw attention and let people know that they can also be heroes of the environment.

“The reason why I’m putting on the Spider-Man costume is to draw people’s attention because when I’m on mufti and I go out for my clean up exercise and I tell people to join me, majority of the people that I meet don’t want to be part of the exercise,” he said.

“So it became a plan to put on the Spider-Man costume so that it can get the attention of the people. So that they will love what I’m doing, so that they will also become a hero.”

Nigeria’s @SpiderMan is on a serious mission to clean up the streets – of litter. He leaves the crime-fighting to his colleague… 😉🕷🦸🏽‍♂️@Marvel | @NigerianSpider1 | #SpiderMan | https://t.co/qrcbMJtlMm pic.twitter.com/tH0BE5vUO6

In a post on his Twitter handle, Olakunle said the superhero persona projects him as a protector of the environment.