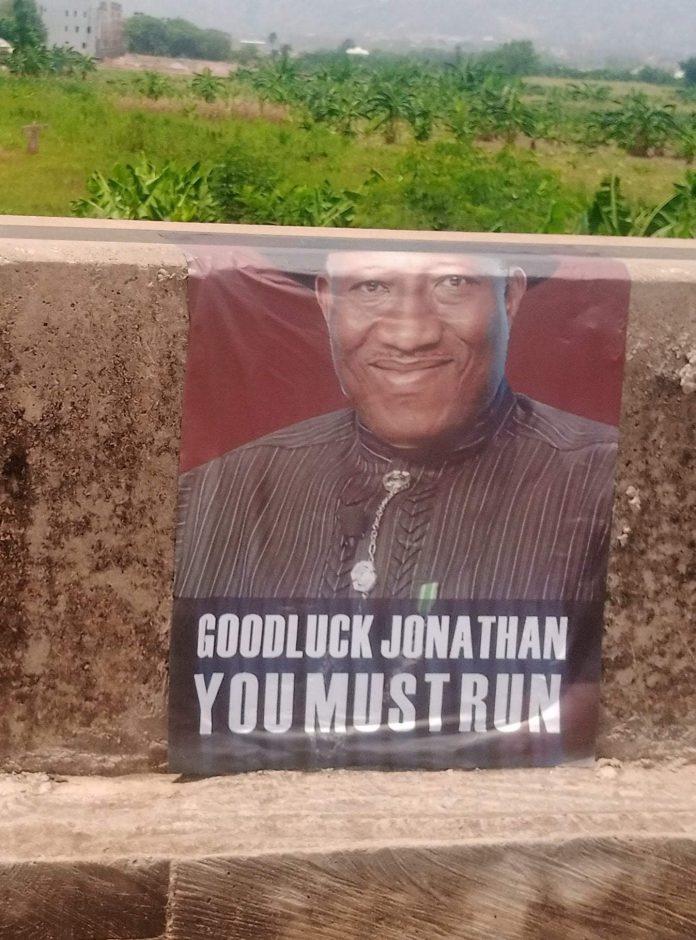 2023 General Elections continues to gather momentum, posters of former President Goodluck Ebele Jonathan have flooded some cities in Northern Nigeria. This has equally sparked reactions on social media, with some expressing excitement about the possibility of his re-election in 2023.

In Gombe, some of the posters which bore the inscription “Mai Naisara” (The Luckiest One) were spotted around Rainbow Roundabout and the Federal College of Education (Technical) roundabout.

The posters were also seen around Gombe Central Roundabout.

Reports also making the rounds said other posters appeared in some streets in the Sabon-Gari area of Kano state, including Abaraba Street, Onitsha Street and Burma Road. The posters of the former President had the inscription “Mai Naisara” (The Luckiest One) and “Goodluck, Our Choice”. Similarly, as making the rounds, the posters were also said to appear in the Federal Capital Territory, Abuja, with claims of appearing at some streets in Maitama, Asokoro, and Garki.

The posters of former President Goodluck Jonathan have also been seen around the Wuse II area especially around the Blantyre Street area where the National Secretariat of the ruling All Progressives Congress (APC) is located.

Posters with the inscription “Goodluck Jonathan You Must Run”, are occupying a conspicuous position on the wall of the party secretariat and the walls and fences of some uncompleted buildings around the secretariat.

It will also be recalled that last week, hundreds of youths stormed President Jonathan’s Maitama office calling on him to declare his intention to run for President. In his response, the former President told the youths to participate more actively in politics and always look out for leaders that will carry the youths along. Meanwhile, other posters have equally been seen in Lafia, Keffi, Akwanga and other major towns across the state.

According to the reports making the rounds, from Minna the Niger State Capital, women and youth groups staged a peaceful march from Mobil Roundabout to the city gate with posters and banners calling on the former President to run for the Presidency in 2023.