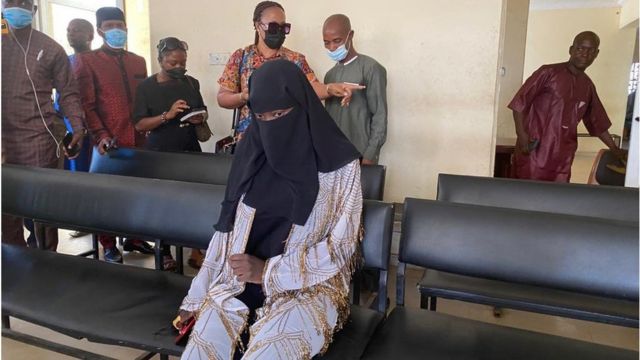 An upper area court in Zuba, Abuja has vacated its rearrest order on Hauwa Muhammad, the controversial sex therapist better known as Jaruma.

The police had arrested and charged Jaruma with false news publication, intimidation, and defamation of character after a petition was submitted by Ned Nwoko, the billionaire businessman.

The entrepreneur was arraigned in January while the court granted her bail — after she had spent four days in prison.

But when the hearing of the case resumed in February, Jaruma was not in court, thereby stalling the trial.

Ismailia Abdullahi, the judge, had revoked her bail and ordered the rearrest of Jaruma over her absence.

The judge accused her of shunning the court despite being aware of the date of the hearing.

But Jaruma had appealed the court order through Odiba James, her counsel.

During a hearing of the case on Wednesday, the sex therapist’s lawyer apologised for her client’s absence in court.

The lawyer argued that the development was due to Jaruma’s ill health and was not deliberate.

James further assured the court that his client would be of good conduct and not jump bail as feared in some quarters.

The prosecution counsel, however, opposed the application, arguing that approving such would amount to sacrilege to the sanctity of the court.

Buttressing his argument, the prosecution counsel cited Jaruma’s comments on social media amid the trial.

In his ruling, Abdullahi upheld Jaruma’s application. The judge also held that the entrepreneur should not be denied bail as a punishment since she has presented herself in court.

“In the interest of justice, it is the court’s opinion that there should be no hindrance to the substantive matter,” he said.

“It is a time that bail should not be denied to punish the defendant since she has presented herself. The court might temper justice with mercy.

“The earlier order of arrest is hereby vacated. But the order for the social media that she should not make any publication and for her not to disrespect the court order is restored.”