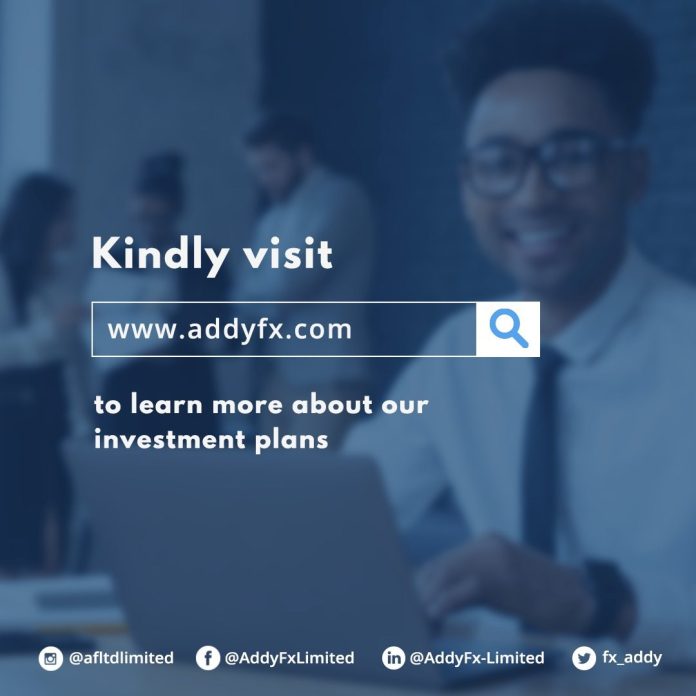 While 2021 served as a recovery year for many individuals and organisations that drowned in the loss caused by the Covid pandemic, the reverse was the case for some investors who lost a fortune to investment firms.

Like many investments platform that went down last year, Addy Finance and Investment Ltd, formally known as AddyFx, was one of such. Billions of naira of investors’ money was trapped as the company could no longer keep up with the payment promise.

AddyFx was founded by Adoms Uju Francis in November 2018 and operated as a Forex trader which provided double-digit monthly returns on investments either: monthly every 6 months or every 12 months with options to either terminate at the end of a pre-agreed cycle, or rollover to mark the beginning of a fresh cycle.

By 2021, the company was able to secure a SEC license from the Security and Exchange Commission, and everyone thought it was the beginning of a new chapter and opportunity. However, that wasn’t the case; instead, the company started failing investors shortly after. This caused the company to sink with investors’ funds.

From the account of Tayo, who convinced his mom to sell their only property in Lagos to invest in AddyFx, to those who had staked their tuition fee, house rent and more, newsmen compiles the stories of how investors of AddyFx trusted the company with their planned funds, but was met with disappointment when the company could no longer live up to its promise in May last year.

How the company went under has continued to be shocking to investors who had perceived the company to be one that had the potential to stay for the long haul, considering it was one of the few companies that was able to secure SEC license last year.

To answer the questions raised by many, Newsmen spoke with an insider of the company who worked as a salesperson.

In this article, we summarise the account of AddyFx’s crash into 5 reasons.

For the sake of anonymity, the narrator will be identified as ‘Charles’.

1. Excessive and unstainable rate of interest

Prior to obtaining SEC license, Addy Finance promised investors a monthly Return on Investment (ROI) of 13 – 25%, which a lot of people were drawn to because of this.

Meanwhile, the lack of license from SEC continued to be a setback to achieving the objective of the company as a lot of investors were quick to turn down the offer, although attractive, when they ran a check on the company and found that it was not licensed by SEC. As a result, there was the need to approach SEC and do the needful.

Charles told newsmen, “When Addy wanted to register with SEC, SEC gave them conditions they had to meet, and one of which was the name had to change. That is, they had to do away with the ‘Fx’nomenclature because the government does not recognise any Fx trading company in Nigeria; and they have to diversify their portfolio.”

“Another condition SEC gave was the need to drop the percentage offering if the company must continue. They gave us a benchmark of 3 -5%, but we were able to talk to them, and we agreed on 5%, 7% and 10%”.

Diversifying the portfolio wasn’t much of an issue because the company was already doing real estate, logistics and some other things; however, reducing the rate wasn’t an easy thing to do as a lot of people were drawn to the scheme because of the attractive return rate.

Despite this, Charles explained that the new agreement with SEC became the major selling point for the company as investors were encouraged to invest before the license came to enjoy a high-interest rate before the window closed.

“We told people that if you don’t invest now, by the time we get SEC license, they won’t be able to get that percentage again. By the end of that week, we gave as a window for people to pay; the company took in over a billion dollars on investment”.

Upon the arrival of the license rather than serve as a boost for more customers, Charles explained that it became the major factor driving investors away.

“It was after we got SEC license that the problem started, because first of all, we had to drop our percentage. The money was not coming in the way it used to. We had believed that if we got SEC, money would be coming in, but we got to understand that Nigerians do not really care about the security of funds. What they wanted was profit. And they felt our percentage was too small.

“The management started putting much pressure for us to go out and get money, and that was when we started getting the gist.”

Charles explained that before the SEC recognition, a lot of investors had pulled out of their banks to invest in the company due to the relatively low returns offered by those banks. So when Addy could no longer keep up with the high rate, naturally investors began pulling out their funds to put in the bank where it is safer.

“Some people went to tell our high-net-worth investors that the way it is going, Addy may soon crash, which made them start panicking. A certain high-net-worth individual removed about N5 billion, and others who withdrew a huge amount as well.

“As a result of the shock, Addy started delaying payment. Returns which used to come as early in the day started coming by 1 pm and increased to 4 pm, 5 pm, and before you know it, people had to make calls before they got their money, and that also increased panic. People were getting scared, and they started pulling out their funds. Money was not coming, and people were pulling out funds.

When the company started defaulting on payment, Charles agreed that one of the company’s biggest mistakes was shutting down its social media handle to avoid people calling out the platform.

He said, “One of the mistakes we made was that when the payment commenced, we closed down our IG account, and that was when people started calling us scams. As a result of that, by the time we told them we were going to be paying back all their money, some people had already gone to EFCC, and you know when an investigation starts, they have to freeze accounts.

“They started freezing many of our accounts. But then we kept on paying just to relieve the number of people on our necks. People found out that some were getting paid, and they went back to EFCC to lodge a complaint. Their plan was to meet EFCC to help them collect their money, not knowing it would affect everybody. EFCC froze our account; banks froze our account, and some of them were already suing us to court.”

As a lot of people feel that AddyFx might have mismanaged funds, Charles feels that the rumour may be true, judging by the kind of flamboyant lifestyle the management of Addy threw and the level of unprofessionalism.

“When Addy was doing well, there were some mistakes that the finance department made because the staff were hired based on familiarity, not based on professionalism. It was when they were trying to restructure that they started hiring people with qualifications. So, most people were friends and relatives of the MD. In fact, the MD’s Bolt driver was the one who later became the Executive Director.

“I actually feel there was a mismanagement of funds because money was pushed out to our factory. Most of the guys in Management were living very flamboyant lives- booking 4-star hotels when they travelled to Abuja.

“Another error Addy made was its opening of too many branches. In less than a year, we opened about three branches. We opened in Port Harcourt, Makurdi and Imo state. These branches were very unnecessary. I understand that we wanted to create employment, but as a company that is not up to 4 years old, Addy should have really calmed down”.

While Charles faults the lapses in the system and structure of the company for its failure, he also blames SEC for not spotting the red flags on time.

He said, “If SEC had really checked our account, they would have known that something is not right here because the money we were using to diversify was not coming from our profit. We were using investors’ funds to diversify into projects like real estate, and you know, real estate in Nigeria takes a while to be profitable.

“Imagine using a billion naira to build an estate somewhere like Imo state, and you are expecting it to be profitable in 6 to 12 months, you have to pay investors 20% in one month. It doesn’t make any sense. So if SEC really did their job well, they could have checked and seen that the business was not sustainable, and shut it down before it was too late”.