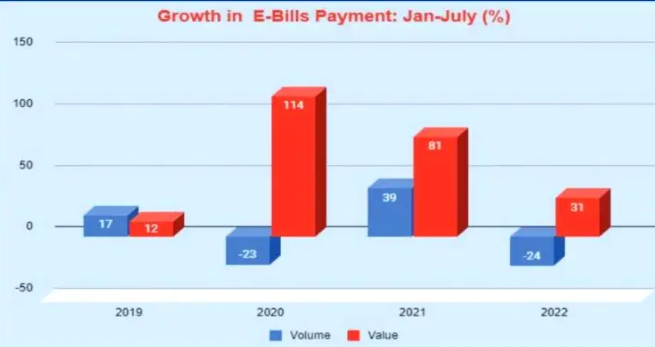 In apparent reflection of the change in consumption pattern of Nigerians, including reduction of spending on non-essential goods and services, compelled by the historic inflationary pressures across the country, the number of utility bills payments fell by 24 per cent, year-on-year, in the seven months to July, even as the value of payments rose by 31 per cent.

This, according to analysts, means that fewer utility bills are being paid at higher unit cost.

Data from the Nigeria Interbank Settlement System, NIBSS, on electronic payments for utility bills (E-bills) such as power, Pay TV subscriptions amongst other everyday utilities showed divergence in the volume and value of e-bills payment in the seven months to July.

This contradicts the trend since 2018 when volume and value of e-bills payment move in the same direction, with the exception of 2020 owing to impact of the economic lock-down triggered by the COVID-19 pandemic.

This divergence, according to analysts, mirrors the rising inflationary trend where cost of services are rising while actual units of the services demanded the consumers are reducing in response the rising cost.

Speaking in this development, Ayodeji Eboh, Managing Director/Chief Business Officer, Optimus by Afrinvest, the Digital Platform powered by Afrinvest, said: “The rising inflation rate will impact the cost of services and as a result, disposable income will shrink.

“The NIBSS data on e-bills payment buttresses the impact of inflation on consumer wallets as the value of services paid for reduces. In the hierarchy of needs, utilities will rank after food.”

Inflation trend
The annual inflation rate rose for the seventh consecutive month to 19.64 per cent in July from 18.6 per cent in June, according to data from Nigeria Bureau of Statistics, NBS. The inflation rate in July represents the highest in five years since September 2005.

Also, the core inflation (All items less farm produce), which excludes the prices of volatile agricultural produce rose, YoY to 16.26 per in July 2022 to 13.72 per cent recorded in July 2021.

The rise in food inflation rate, according to NBS, is caused by increases in prices of bread and cereals, food products like potatoes, yams and other tubers, meat, fish, oil, and fat.

The price increases driving the inflationary trend is reflected in the NBS Selected Food price watch report for July.

“Consumers are broke and they are living on a very tight or limited financial budget (shoestring). As a result, they are eating less,” he said during a media interview.

Corroborating this, Tunde Abioye, analysts at FBNQuest Securities, while commenting on the e-bills data from NIBSS, said: “The increased value reflects the higher cost of goods and services particularly for utilities, energy and other stuff.

“It is also possible that as you have mentioned consumers are buying less frequently but are paying more in value terms because of the higher cost of goods and services.

“Using myself as a case study, I’ve cut back on my electricity consumption per kilowatt hour, but I am spending more on electricity because the cost has increased significantly.

“The cost of electricity in my estate moved to as high as NN168 per kilowatt hour, from somewhere around NGN 80 last year.

“It has recently gone down a little to N148 per kilowatt hour. I think a lot of services reflect things like this and people have to cut back or ration on usage.”

On his part, Ebitonye Atte, Research Analyst at United Capital Plc also cited increase in the prices of utility services as the reason for the increase in the value of e-bills payment.