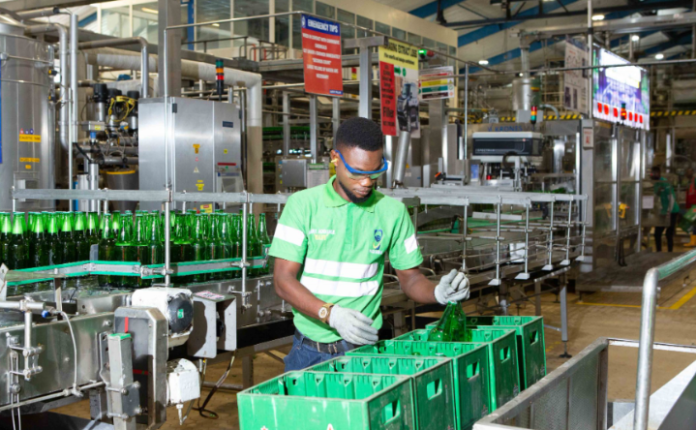 Nigerian Breweries Plc sped up on its long recovery journey with a net profit of N18.7 billion at half year operations in June 2022. The six-month profit figure is ahead of the company’s full year after tax profit of N12.7 billion with which it began a strong turnaround in 2021.

The brewing company’s interim financial report for the half year ended June 2022 shows quite a promising year in which a major part of its recovery task could be covered. The company’s leadership is on a hard drive to build back the group’s profit after a three-year drop to N7.4 billion in 2020 to the previous peak of over N43 billion or better.

The company began a strong turnaround in 2021 with a 72 percent profit leap, which has accelerated to top speed growth of 143 percent year-on-year at the end of half year operations.

A statement by Uaboi Agbebaku, the company secretary, said the marked profit improvement is driven mainly by top-line growth resulting from pricing strategy and better mix.

The company closed the half year trading with net sales revenue of N274 billion, an increase of 31 percent year-on-year and an even performance across the two quarters. Improving sales has been the strength for the company’s turnaround since last year when revenue picked up from 4 percent increase in 2020 to 30 percent.

Nigerian Breweries Speeds Up Recovery With N18.7bn Profit In H1

The increase in sales at the end of half year in June 2022 represents additional revenue of N65 billion raked in over the period.

Growing revenue is reinforced by moderated cost of sales, which the company is maintaining for the second year. At N155 billion, cost of sales grew at a slower pace of 18 percent than the 31 percent growth in sales. This improved the margin generated on the naira of sales from 37 kobo to 43 kobo over the period.

The moderation of input cost spurred gross profit well ahead of sales to an increase of over 52 percent year-on-year to N118.7 billion at half year.

Further strength came from a strong growth of more than three times in other income to N2 billion over the review period with much of the growth coming in the second quarter.

A challenge on the side of cost continues to come from marketing/distribution expenses, which could not be contained as happened last year. At N70.4 billion, marketing and distribution cost grew well ahead of sales revenue at 52.4 percent year-on-year.

Agbebaku said the rising cost of marketing and distribution was driven by an increase in commercial activities and the rising price of diesel.

The administrative cost however moderated at an increase of 16.5 percent to N14.5 billion at half year, changing the pattern from growing ahead of turnover in 2021.

The strong gains on the side of income and big cost savings from input cost and administrative expenses powered an exceptional growth of 80 percent in operating profit to N35.8 billion at the end of June 2022.

Net finance expenses therefore grew by 27 percent year-on-year to over N10 billion at the end of half year operations. The foreign exchange losses arose from a higher cost of meeting foreign obligations to overseas partners, according to Agbebaku.

The company’s ability to convert revenue into profit improved with revenue growth and major cost savings. Net profit margin continues to improve from 2.2 percent in 2020 to 2.9 percent in 2021, jumping to 6.8 percent at the end of June 2022.

The company expects that the increased momentum and consistent profitable growth is seen at half year would be maintained despite a very challenging operating environment.