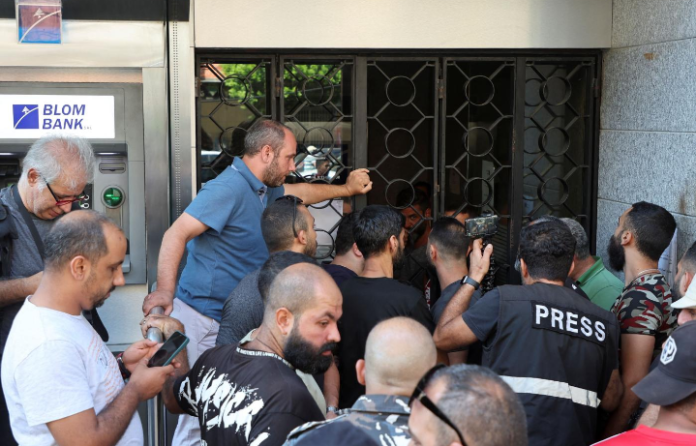 Financial institutions in Lebanon are planning to shut down for three days amid increasing demands by angry depositors for their savings.

On Friday morning, five Lebanese banks were held up by armed depositors, according to a report by Reuters.

Since late 2019, Lebanon’s commercial banks have imposed capital controls by setting withdrawal and transfer limits over an economic crisis, leaving many of the population unable to pay for basics.

A security source told Reuters that a man with a gun — that turned out to be a toy — was arrested after holding up a Lebanese bank in the southern city of Ghazieh.

BLOM bank, a Lebanese bank, in a statement, told Reuters that an armed man entered its branch in Tariq al-Jdideh, Beirut’s neighbourhood, seeking his deposit.

The bank added that the situation was under control.

The man, identified as Abed Soubra, was cheered on by a large crowd of people gathered outside — a scene that has played out in several such incidents.

In a third incident, a man armed with a pellet gun entered a branch of LGB bank in Beirut’s Ramlet al-Bayda area seeking to withdraw some $50,000 in savings, a bank employee said.

Friday’s incidents followed two others in the capital of Beirut and another one in the town of Aley on Wednesday.

A woman wielding a gun and some associates had briefly held hostages at a branch of BLOM bank in Beirut — before leaving with more than $13,000 in cash from her account — in a desperate attempt to fund “hospital treatment for her cancer-stricken sister”.

In Aley, Lebanon, another armed had entered a bank’s branch, BankMed and retrieved some of his trapped savings before handing himself to authorities.