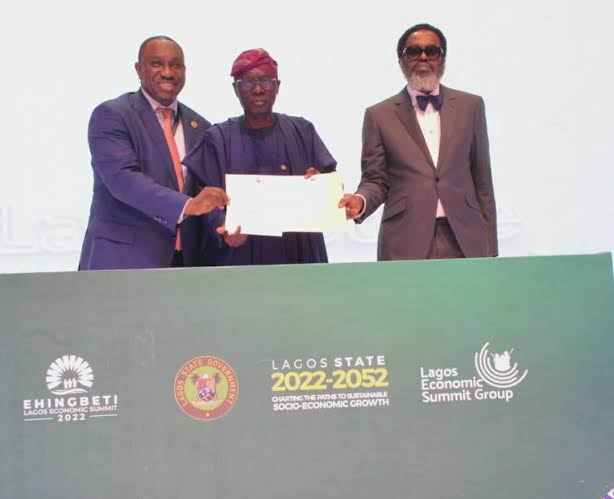 Babajide Sanwo-Olu, governor of Lagos, has launched the state’s 30-year development plan which will be implemented between 2022 and 2052.

Sanwo-Olu made this known on Wednesday at the end of the 2022 Ehingbeti Economic summit in Lagos.

He said state also signed the Lagos state wealth fund (LSWF), and civil bills, adding that they will be sent to the state house of assembly for passage into law.

During signing ceremony, Sanwo-Olu said the two bills are critical to the future development of the state, as they would enhance the ease of doing business in Lagos.

He said the LSWF is a signal of the commencement of the state’s sub-sovereign green bond that will create sustainable wealth for the government and the residents.

According to him, the fund will allow the state to create a wealth reserve that will be instrumental to delivering infrastructure and preventing Lagos revenue from external shocks and making the state a technology and investment hub.

He added that LSWF would bring development as it is the first sub-national sovereign wealth fund in Africa, thereby joining Singapore and Canada which have similar wealth funds and had gone on to do great things with it.

Sanwo-Olu further said the house of assembly has been notified that the bill was on its way for their approval, adding that he has been assured by the legislature that the bill will receive speedy passage as the law is expected to play a critical role in the future of Lagos and its 30-year development plan.

“The state assembly is aware of this bill we are signing today. This is critical to secure the future financing of Lagos and serves as reserves to plan for the future,” the governor said.

Speaking further, Sanwo-Olu said the Lagos state civil bill is expected to speed up the judicial process to ensure that judgment is discharged on time, thereby, fast-tracking civil proceedings.

Believing this would improve the ease of doing business in the state, he said the government had received approval for the Badagry seaport while several hectares of land had been earmarked for the project.

Meanwhile, on the launch of the Lagos state 30-year development plan, the Sanwo-Olu said the government will continue to pursue policies that are inclusive and equitable to all in the development plan period.