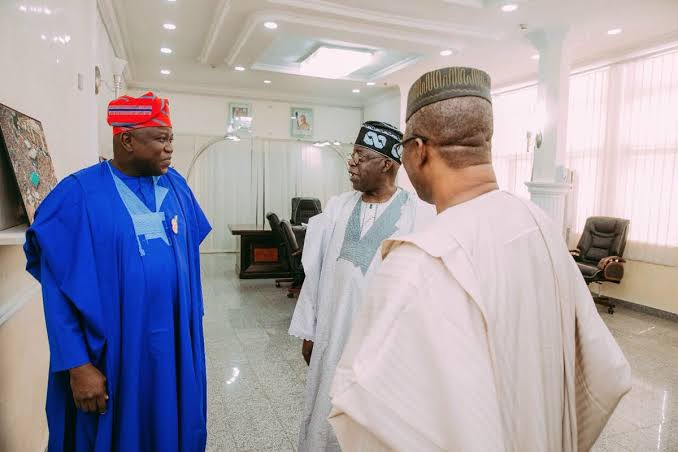 THE unsettled question of the falling apart of Mr Akinwunmi Ambode and national leader of the All Progressives Congress, APC, Asiwaju Bola Ahmed Tinubu has come to haunt the presidential aspiration of the latter, Saturday Vanguard has learnt.

Mr Ambode was denied a second term in office in 2019 after Tinubu and the Governance Advocacy Council, GAC, the apex supervisory body in the APC in Lagos State withdrew support for Ambode. That support was switched over to Mr Babajide Sanwo-Olu who easily won the primary supervised by a panel led by former Cross River State governor, Mr. Clement Ebri.

Saturday Vanguard gathered that at the meeting between Tinubu and APC governors last Tuesday that the issue was on the sideline of the discourse as some governors expressed concern that Tinubu was unforgiving of Ambode despite appeals from several governors and emissaries of President Muhammadu Buhari for a rethink.

“The issue of Ambode and Obaseki came up and some governors expressed concern that despite the personal efforts of the president and many governors who came to lobby for Ambode that Asiwaju did not relent,” a source privy to the discussion disclosed.

“It was a matter of concern that if for someone like Obaseki that governors came as a delegation to beg and you were not commander-in-chief and you refused to heed, we wonder how he would treat us subsequently,” a source privy to the discussion disclosed.

However, the assertion was pooh-poohed by the Tinubu camp yesterday which dismissed the insinuations as the source revealed deep details of how Ambode allegedly severally humiliated Tinubu and many of those who helped to make him governor in 2015.

“Ambode would not even answer Asiwaju’s phone calls and it got to an extent that anytime he (Tinubu) wanted to reach him, he would go through a third party and one of Ambode’s PA’s (Biodun) to get to him,” a source close to Asiwaju Tinubu disclosed.

Saturday Vanguard reports that the substitution of Ambode by Sanwo-Olu was reportedly a popular move by the top hierarchy of the party in Lagos who alleged that the former governor became out of touch with many of them.

Others present were Abudlrazaq Abdulrahman (Kwara), Hope Uzondinma (Imo), Abdullahi Sule (Nasarawa) and Isiaka Oyetola (Osun). Saturday Vanguard reports that Tinubu, Vice President Osinbajo and Minister for Transportation Rotimi Amaechi have been projected among the leading declared aspirants for the presidential ticket of the APC.