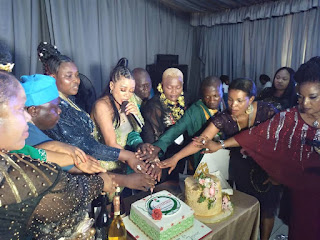 It was another gift galore on Sunday 27th November 2022 as World renowned herbal products JIGSIMUR celebrated its 4th year anniversary in Lagos.

The event which attracted the who is who in the Nigerian business community waes held to reward the products distributors across Nigeria.

On hand to dish out the goodies was the CEO of JIGSIMUR Zidex International Dr Mrs Lilian Chinonso Osuofia who incidentally was also celebrating her birthday same day.

In her address at the event , Dr Mrs Lilian Osuofia thanked the customers and distributors of the company for a job welldone.

For her , it was like a dream come true seeing JIGSIMUR products all over Nigeria and beyond.

The acceptance of the products across the country is a testimony to the efficacy and the impact it has made in the lives of Nigerians within its four years existence in the country.

She stated that the event was not only organized to thank the distributors and agents but another opportunity to sow into the less privileged in the society especially the widows who were at the event in their numbers.

She assured everyone that the product has come to stay and that the company will continue to add its quota to the socio economic development of Nigeria.

In her own speech , a member of the management team of company Lady Uloma Ogu an insight into the company’s achievements in the past four years.

In 2019, the company gave out six 4Matic Mercedes Benz Jeeps and 39 International trips to its distributors.

In 2020 , twelve 4Matic Mercedes Benz and 50 International trips were handed out to JIGSIMUR distributors.

On Sunday , the number of vehicles trippled from last year’s.

A whopping 52 4Matic Mercedes Benz and 186 International trips were handed over to their distributors.

Each of the company’s international trips is worth N500,000.

The company as part of its Corporate Social Responsibilities also embarked in doling out millions of naira to charities.

Under the period in review the company visited Lagos State University Teaching Hosptial in Ikeja where it donated materials to patients and offset hospital bills of indigent patients.

Some of the winners and recipients of this year’s awards thanked the management of JIGSIMUR especially its Chief Executive Officer Dr Lilian Osuofia for the trust reposed on them promising that they will more than anything else double their efforts in the coming years. 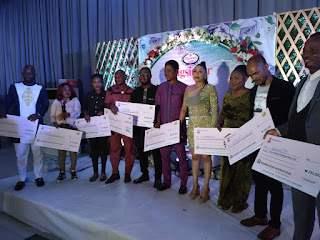 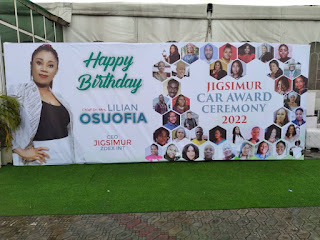 The highlight of the event was the cutting of the CEO’s birthday cake , handing over of keys to the 52 car winners and donation of cash and materials to several widows who were in attendance.

Members of staff of the company were not also left out of the largesse as most of them went home with cash prizes.