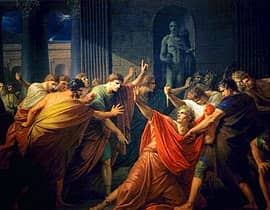 During the civil war between Pompey the Great and Julius Caesar, Marcus Junius Brutus , one of history’s historical figures known by just his mononym – Brutus, had supported Pompey.

After Caesar’s victory at Pharsalus in 48 BC, Brutus was pardoned and taken into Caesar’s favor, becoming his closest and trusted friend. Brutus would later become governor of Cisalpine Gaul and praetor of Rome two years later, perhaps, by the sheer magnanimity of Caesar, the Emperor of imperial Rome.

However, during the spring of 44 BC, the same Brutus joined the Roman general Gaius Cassius Longinus, (who had distinguished himself in the war against the Parthians , but an old foe of Caesar), in a bloody conspiracy against the latter.

Worthy of note is that the most brutal of the mortal stabs that destroyed the invincibility of
Caesar came forth from the same Brutus.

Holding tight to life as Caesar beheld the Grim Reaper holding a scythe coming for him , with his last mortal breath uttered ‘Et tu Brutus’, – and you too, Brutus ?

And he fell into all eternity at the feet of the Senators of Rome, becoming one of history’s most infamous assassinations.

Littered across all history, are the bloody trails of conspiracies, treacheries and betrayal not from total strangers; it has never been, but from trusted acquaintances, at home, at work, even in the most sacred sanctuaries.

My son, take heed to these instructions, says the preacher in Ecclesiastes.