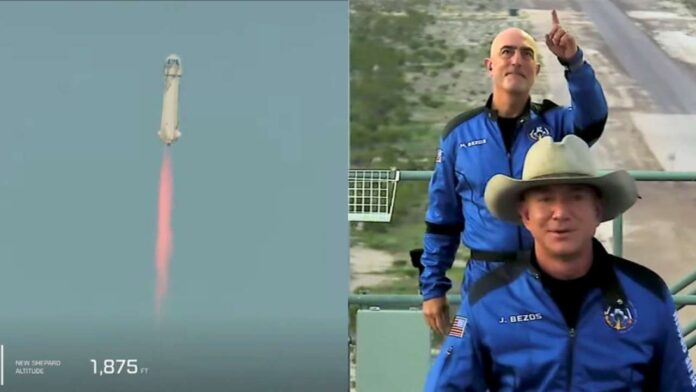 “Congratulations to all of Team Blue past and present on reaching this historic moment in spaceflight history.

This first astronaut crew wrote themselves into the history books of space, opening the door through which many after will pass,” Blue Origin said after the capsule carrying the passengers touched down safely.

The mission marked another milestone in the space race started by private companies. It was the first time in the history of a commercial company launching a privately funded and built spacecraft from a private launch range with astronauts on board.

The astronauts boarded the crew capsule 30 minutes before the launch and the hatch closed six minutes later. They experienced three to four minutes of zero-g and travelled above the Kármán Line, the internationally-recognised boundary of space.

Blue Origin’s recovery team joined the four-member crew to celebrate their return from space. The successful launch and subsequent touchdown made Wally Funk, 82, the oldest person and Daeman the youngest to have flown in space.