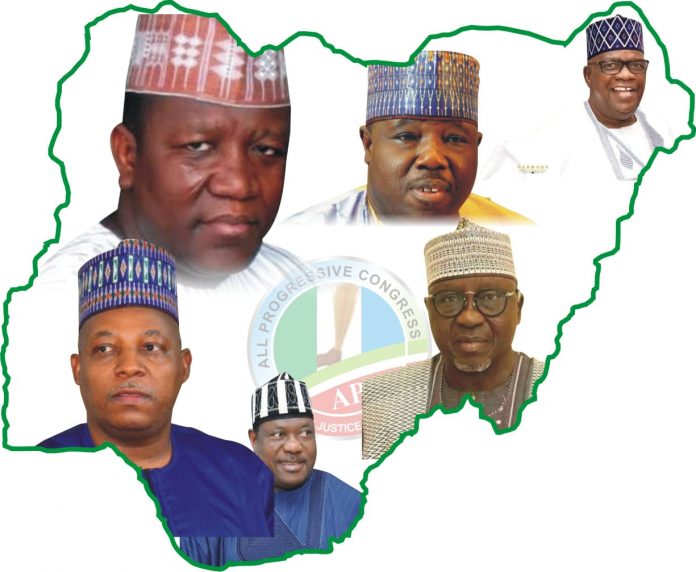 Visible strength (Capacity to win elections and sustain the gains) of a political party largely depends on that party’s internal strength which is determined by effective leadership. This is no different of the largest and Ruling Political party in Nigeria – the All progressives Congress APC.

Been an Opposition political party and now a Ruling one gives it versatility and Capacity to be dynamic as well as capable of turning down it’s perceived misfortunes. It’s growing membership as well as followership is with no doubt bringing Complexities that requires a National Chairman with a worldview and Capacity to manage it so well that it cannot Collapse as insinuations exist in some quarters

Although there are views as to which region should produce the next National Chairman of APC (Zoning arrangement) which may be influenced by the 2023 party’s presidential Flag bearer. A number of contenders/Aspirants from the north emanates with various Strengths and weaknesses.

Currently, the party is Chaired by a Caretaker/Extraordinary convention planning Committee Led by the Yobe State Governor His Excellency Mai Mala Buni whom since assumption on the 25th of June 2021 made a plethora of progresses to the party after the Dissolution of the Oshiomhole led National working Committee- APC-NWC. The Mai Mala Led Committee is expected to organize a National convention somewhere around December this year which Heightened battle for the Chairman seat recently.

Although a southern contender is yet to emerge, perhaps a unanimous decision to cart away the APC presidential ticket but may be a cretin Maw as it lacks legal and or constitutional standing.

The southern presidency and the indecision of time

A view exists, that even if the south did not join the race for the party Chairman. It may end up losing the presidential ticket as it is not a registered position in the party’s constitution, perhaps this is because a number of powerful northern blocs don’t want a power shift to the south for reasons known best to them.

However, few exist in the north that are of the opinion that for justice and Sustainability of the party, equity and fairness should be given to the south to come up with a presidential flag bearer

Whichever is the argument, time shall decide and the intrigues as well as politicking ahead. However, one cannot rule out having a Northern APC National Chairman as a bigger possibility to having a southern APC Presidential Candidate. this is largely Because President Muhammadu Buhari may not play Dirty politics as he is known to be law abiding and always aspiring to end his tenure well.

NORTHERN ASPIRANTS BY GEO-POLITICAL REGIONS: Analysis of their strengths and weaknesses

North-West is the largest geo-political region in Nigeria politics by all parameters. Its voters’ register capacity as at 2019 stood at almost 19 million. Highest in the country.

In the race to APC National Chairmanship it has only 1 Candidate: His Excellency Abdul’aziz Yari Abubakar: Sole candidate in the geo-political region.

Yari has been in the opposition political party since the return of Democracy in 1999. He was in APP as at that time, upon change of nomenclature to ANPP, he kept faith; he rises to becoming a state stakeholder when he became the state party chairman and subsequently becoming the ANPP National financial secretary. In 2003 he contested for membership of National Assembly emerging victorious to represent the good people of Anka/Maradu, also contested for governor of Zamfara state wining in clear term. In 2014 at the build up to 2015 election, Yari was one of the 11 wise men that formed the APC and its ideology.

Recall that in the year 2000 he was one of the 7 persons that met president Muhammadu Buhari to join politics and vie for the President of Nigeria. After persistent pressure and refusal of Buhari to heed the call, they invited the president’s friend, late AVM Muktar Muhammad to persuade Buhari, on AVM’s involvement, Buhari eventually accepted others being; Buba Galadima, Naja’atu Muhammad, late Kumo, Sule Hamma and Fatima Muhammad.

This long term standings of Yari, coupled with his national spread being a national politician gives him strength against all the other contenders whom are largely regional or featherweight politicians.

His first major challenge is that of coming from Zamfara where one former governor was quoted to have said he will never fold his hand and allow Yari emerge as national party chair, to him allowing Yari is equivalent to suicide.  Hence, our preliminary finding reveals that He (the former governor) could do everything possible to stop Yari’s emergence. However he Yari sees that as a non threat as God Almighty is the giver of power.

His second challenge is that, all those that initiate his aspiration to becoming the party Chair are now against him simply because they realized him wining and to them he will be more than them in accomplishment and will block them from attaining any position, a view Yari sees to be myopic.

The third challenge is the common front by the Northwest politicians which are either aspiring for president or vice president, they see his success as defeating theirs as in their myopia view his emergence will stop them from accomplishing their own ambition. Perhaps because no concentration of positions in one zone work.

Also, Abdul’aziz is a grass root politician who started Politics from his locality up to becoming a governor and this speaks much of an expert that could manage effectively political intrigues of any kind.

The Region that has almost 3 aspirants, the highest so far and is alleged to be lopsided in the APC:

A two-term former governor of Borno state between (2003 – 2011) in the Opposition ANPP although a number of people believed him to be Obasanjo’s stooge in the then Opposition and had played insignificant role in the formation of the APC.

However, sheriff jumps to the then Ruling party – the people’s Democratic party PDP at the build up to 2015 elections.

In the PDP he battled Senator Ahmad Muhammad Makarfi to lead the party’s national Chairma, but was defeated by makarfi in a supreme court judgment. this had forced him left the PDP, coming back to the APC.

Although he is yet to make his ambition formal, our source reveals he will soon do that as time for the convention near.

Political analyst has seen no much strength for him as low confidence will be in him as he is used to cross carpeting. Some view his aspiration as relevance seeking and cannot test any waters.

He aspired to be senate President of the current senate and later was persuaded to step down for senator Ahmed Lawan after president Muhammadu Buhari intervention.

He was also of the formation of the APC whom was Hitherto in PDP.

Although, he have slimmer chances to winning the party Chair because of his rift with current governor of his state, inuwa Yahaya, hence, the believe that governor’s have influence in deciding issues in their states.

Goje did not also make his aspiration formal, but preliminary findings reveals that he is still considering his chances before taking a formal stand.

A two time governor of Borno state and current Senator of the federal Republic of Nigeria.

Shettima like many of them is yet to make his ambition formal, but a preliminary investigation reveals that he is still consulting in wider terms before formally deciding on the matter.

He has Respect from president Muhammadu Buhari but considered a Local politician that can only make things happens within Borno state.

Akume was also a two term governor of Benue state- he is currently Minister of Special duties and intergovernmental affairs.

Some sees him close to President Muhammadu Buhari as the reason he was chosen a minister with Special portfolio.

He is also being influenced at the moment to join the race, our preliminary findings reveal.

There is believe that he have ideas if he could champion the leadership but is also adjudge a Benue politician that couldn’t hold power to his party in his state.

The only CPC elected governor in north central in 2011 and currently a Senator from Nasarawa state.

His aspiration is seen to be nurtured by his successor governor Sule Bello who at the commencement of the APC membership Registration explained that the state stakeholders need to come together to support the state to produce the next national party chairman.

Almakura may be strength to reckon with, but his reported invitation by the EFCC in July could affect his capacity to clinch the ticket. This due to the Buhari led presidency campaign against corruption.

READ ALSO! How some quick loan platforms are exploiting the poor

READ ALSO! Can Prosper Quick Loan Make You Prosper? Check It Out!