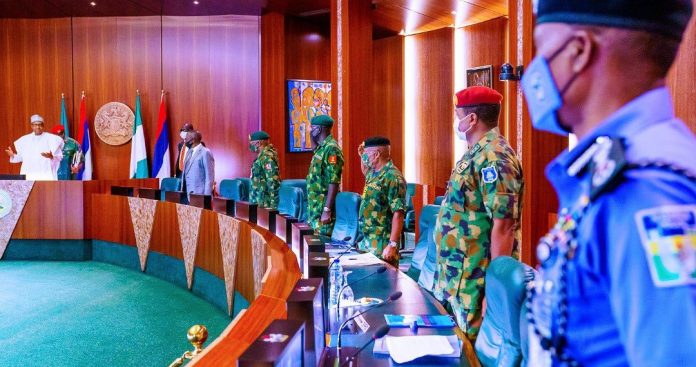 President Muhammadu Buhari says some unpatriotic Nigerians have continued to undermine his policies aimed at curbing insecurity and strengthening the economy.

Buhari, who spoke at the sixth regular meeting with the Presidential Economic Advisory Council (PEAC) yesterday, said such persons are rather bent on wreaking havoc on the nation.

In March, Buhari directed security agencies to shoot anyone seen with AK-47 while ordering a clampdown on bandits.

The president, however, said despite his order, bandits and smugglers have continued their criminal activities.

He also said even though the nation’s land borders were closed, illegal arms and other smuggled items still somehow found their way into the country.

“Some people are mercilessly against this country. We closed the borders to control the smuggling of petroleum products, and check the influx of smuggled goods, arms and ammunition,” he said.

“That was when the comptroller-general of Customs called me, saying 40 tankers laden with petrol had been impounded. I told him to sell the fuel, sell the trucks, and put the money in the treasury.

“They still brought arms and ammunition into the country, brought in rice in vehicles and motorcycles.

“I said shoot anyone found illegally with AK-47, yet they haven’t stopped. People must show consideration for their own country.”

On food security, Buhari said his administration will focus on the development of irrigation facilities in the country, and also encourage more people to go into agriculture.

He noted that agriculture is a good way for the country to overcome the economic challenges confronting it.