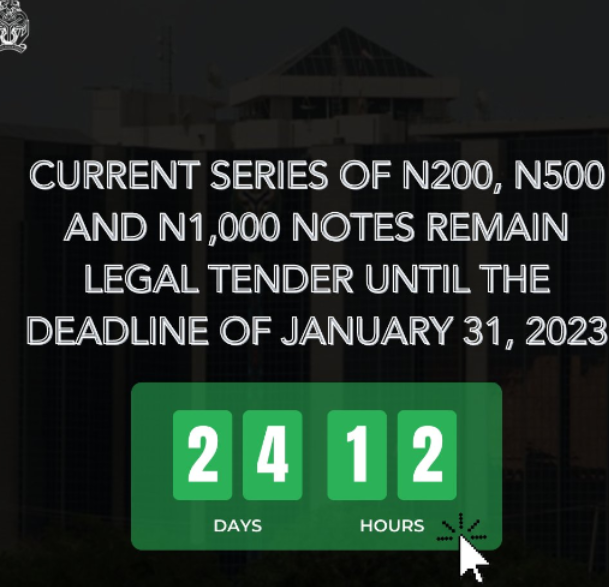 Amid complaints that the new naira notes are not fully in circulation, the Central Bank of Nigeria (CBN) has launched a countdown to the January 31 deadline when the old N1,000, N500, and N200 notes will cease to be legal tender.

Unveiling the countdown on its Twitter page on Friday, the apex bank said the deadline now remains 24 days and a few hours.

Meanwhile, reactions from Nigerians have trailed the countdown on Twitter, with many people faulting the CBN for insisting on the deadline without making enough notes available. Reacting to the bank’s countdown, a Twitter user, Edidiong Enwe said:

“Till today I haven’t had any new notes. Quite okay I’ve seen just 1000 notes with someone. I’m staying in a student area where we expect quick circulation of money.

How then do you give 3 weeks countdown? Do something about it before you start a countdown”
Another tweep, Benedict Nwokoye, lamented about the scarcity of the new notes and wondered how it would be possible to phase out the new notes on January 31. He said:

“Like seriously? I went to withdraw money from the ATM (first bank) and was given old notes. I went to the counter to ask for the new notes, I was told I’ll not be given more than 10,000.00.

How can the dates be possible when banks are still dispensing old notes?”

Also reacting to the CBN’s countdown, a Twitter user who identified himself as Mr A, said:

“How will the old notes be stopped in 24 days? Some of us haven’t even set our eyes on them and yet they’re in circulation.”
For Eddie Onos, the CBN has not shown any seriousness with the deadline. He said:

“Can we be serious for once, please? As of today, ATMs and banks are still dispensing the old notes that are supposed to become illegal tender by the 31st of this month. The financial institutions ought to have stopped issuing them out by now.”

Senator Ali Ndume cited Orders 41 and 51 to seek the leave of the Senate to move a motion on the urgent need to extend the withdrawal of old currency from circulation.

Also, Senator Uzor Kalu urged the CBN to go “as far as April ending to enable people to deposit their cash in banks.”

However, with the beginning of the countdown today, the CBN seems not to be deferring to the National Assembly’s call.